The Mice of St. Marks

I woke up early this morning and drove south toward the coast. It was about a 30 minute drive from Tallahassee to the road that leads into St. Mark's National Wildlife Refuge. I didn't realize the road itself goes on for another 15 or 20 minutes winding through marshes and inlets before you finally arrive at St. Mark's lighthouse. Somewhere along the way, there's a guard post where I guess they'd usually charge an entry fee. But it's shuttered now, along with all the rest of the buildings in the refuge. So I drove on through without stopping till I came to the lighthouse. 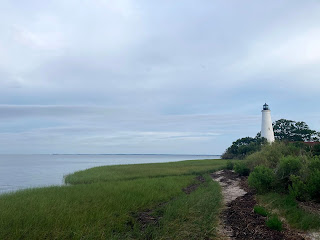 I had come dressed to run, but realized I didn't know exactly where. A friend had told me there were some trails around, and that they'd been nice to run on, except that all these mice kept running across the path. I wasn't sure I believed this last part — and walking around the parking lot that seemed surrounded by water on every side, I started to doubt that there were trails at all. I eventually wandered around behind the boarded-up lighthouse and discovered what looked like a path leading between some battered looking palm trees. I set out onto it at a jog, and was almost immediately accosted by a mouse. 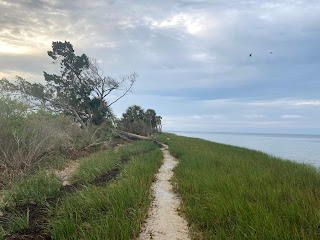 Or rather, a hispid cotton rat. As I trotted along, more and more of the little creatures sprang up off the trail and into the thicket on either side to the point it started to feel a little excessive. This only stopped when the trail came out into the grass along the shore and became increasingly marshy, so it almost felt like I was running in the surf and I could feel the watery sand sucking at my sneakers every step I took.

The little path ended at the point of the narrow finger of land that it was on. Water on three sides, I couldn't go any further. I was disappointed it hadn't lasted longer, but stopped at the end to take in the view for a few minutes. It had been cloudy when I arrived, but the sun was still low in the sky and a few rays were breaking through the clouds. Then I turned, and fought my way back through the mice. 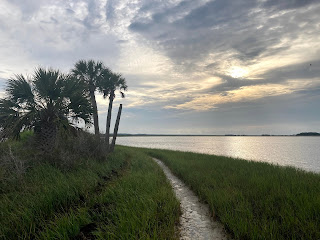 This little adventure was my first excursion out of Tallahassee in almost four months. I haven't thought about that often. I've been busy, and in some ways my life has changed less than most people's this year. But this morning I realized how much I miss going places and doing things. It feels like it's been a long year already. And it has been. But I suspect we'll get through it. And I look forward to doing things like I did this morning a lot more often.
Posted by Andrew at 5/24/2020 09:33:00 PM