I've been on the road for three weeks now. Heading west across North Africa.
During two weeks in Cairo, I barely left one neighborhood. And it was still like a kaleidoscope. Then we came to Morocco, and it started to turn.
A blur of cheap hotels, crowded trains and foaming oceans. Falling asleep under elaborate mosaics at dusk to be shaken awake by the thundering call to prayer at 4am every morning. Falling back asleep and getting up with the African sun streaming in at nine to get breakfast at a cafe where everybody's already on their second joint. Surfing in the Atlantic. Staring at a wall for four hours.
Like a Paul Bowles novel, but with no sex.
Different characters. Heated arguments on rooftops. Not making eye contact on long train rides facing across from each other. Getting completely sick of them. Mutual resignation to the fact that you're with them. Forgetting why that is. Complete comfort with each other that could be a sign of deep intimacy, or deep contempt.
Like some kind of marriage. Or a Paul Bowles novel, but with no sex.
Rabat, Fez, Casablanca. Somewhere else. Somewhere new.
Posted by Andrew at 2/28/2015 06:17:00 PM 1 comment:

Cairo: The Dust of Nations

Three days ago I arrived in Egypt. It's a place I grew up always hearing about, and I was eager to experience it for myself and see if it bore any resemblance to the place movies, Bible stories, comics and history classes painted it to be.

My first evening I dined out with a medical doctor from a well-to-do family––currently working as a middle school teacher in Cairo. Over creamy shrimp alfredo and shisha, he painted a rather bleak picture of the situation in the nation since the revolution: Excited idealism turned to disappointment, turned to terror, turned to pleading for a return of the order that had been revolted against.

I learned a lot from the doctor, and from others we met, but after a day and a half of sitting in posh cafés and wandering around titanic shopping malls on the suburban outskirts of the city, I was eager this morning to get in a dirty taxi bound for what I'd heard was the throbbing heart of the nation: Inner-city Cairo and Tahrir Square.

Our official destination was the National Museum, and after an interminable amount of time stuck in a traffic jam in a poorly ventilated tunnel, we emerged, blinking, in front of the imposing neo-classical structure. Scuttling past rows of black masked special ops troops below burned out high rises with a heavy wind gusting dust into our teeth and eyes; the whole city had an eerie, almost apocalyptic feeling. 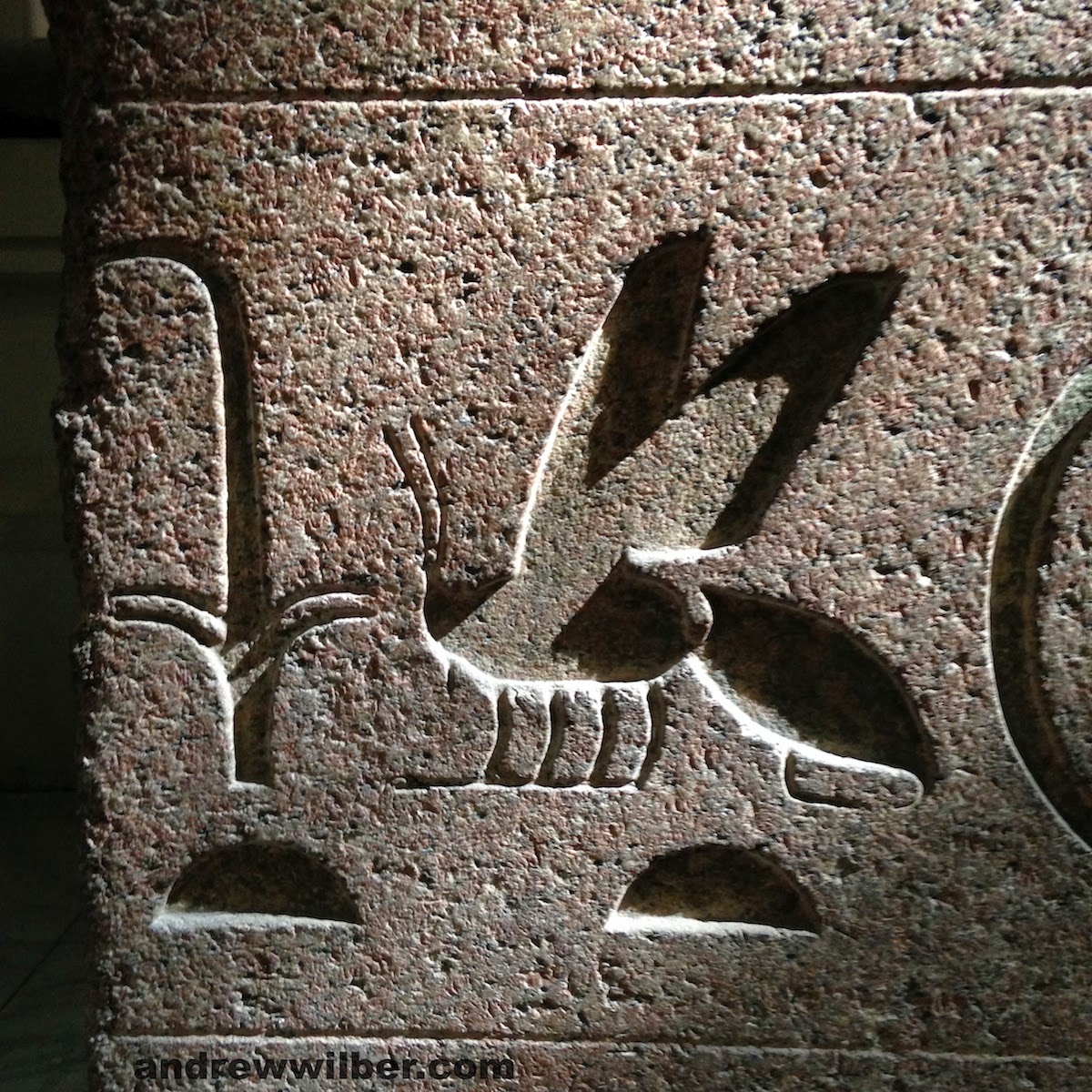 The museum, once we got inside, was spectacular. Ancient Egypt must've been everything the movies and comic books made it out to be. I was slightly disappointed to learn (from Google) after an hour long search on foot that the one Egyptian artifact I could have identified as a child and which even emblazoned the tickets we'd purchased to get in: King Tut's funeral mask, had, apparently, after millennia of careful preservation, been irreparably lost to history in a still somewhat unclear incident involving a clumsy curator and some misapplied epoxy shortly before my arrival. In the end, though, I think I found one I like better: 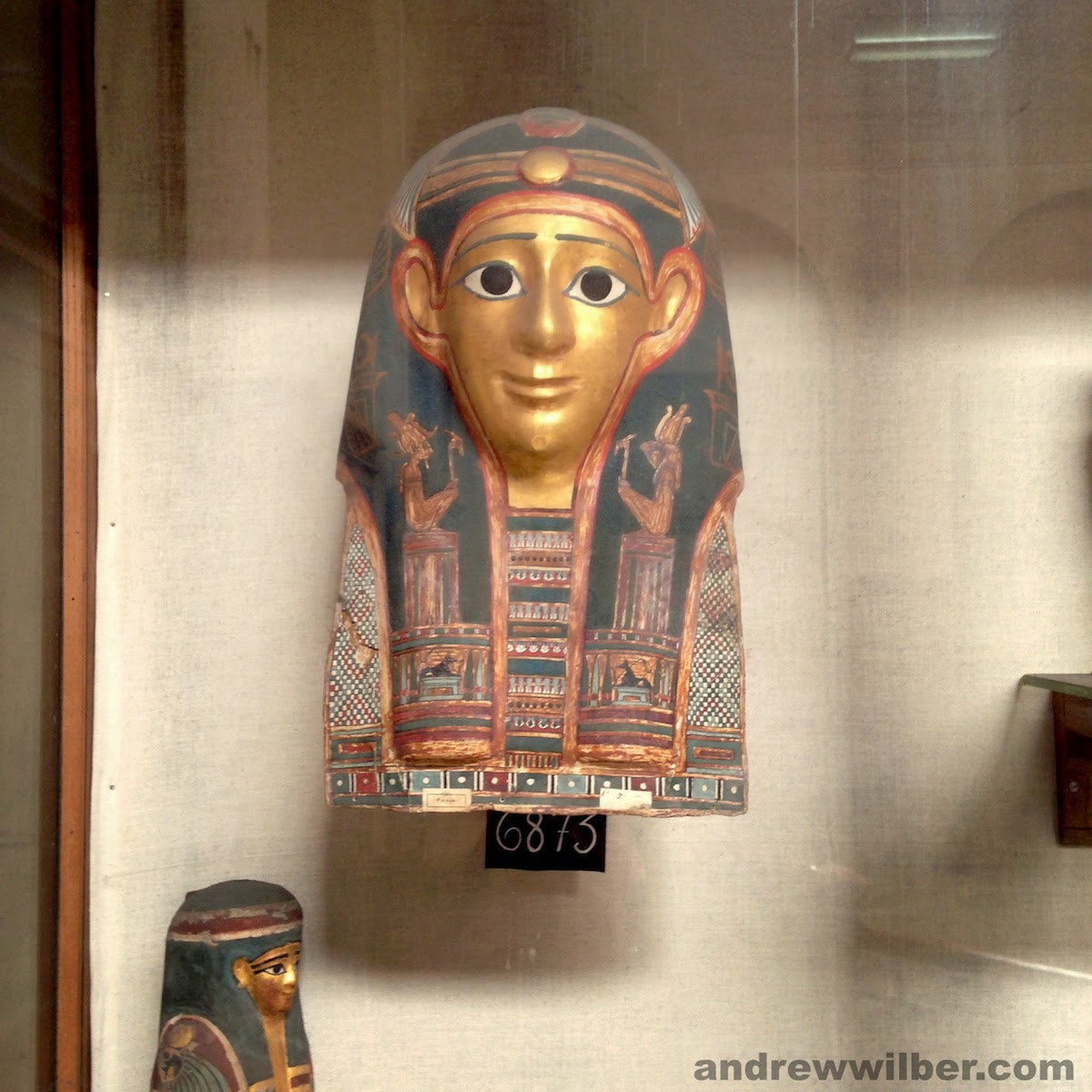 Even in the midst of the remains of the grandeur of ancient Egypt, though, it was hard for me to shake the feeling of present apocalypse. Priceless artifacts ornately decorated with delicate hieroglyphics were piled haphazardly in cases with descriptions that looked like they were printed in the 1950s. Crates were piled all over the floor and in some places it felt more like a massive antique warehouse than a museum. As we emerged from the mummy chamber––the only decently maintained corridor of the cavernous building––a stray cat ran across the floor and I could feel the sand driven into the building through the massive double doors of the entrance on a wind that had only strengthened since we entered a few hours before.

We emerged into a gale of grit that made it hard to breath and a crowed of men desperately hawking postcards and tours to us. It turns out, the city was that afternoon, being descended upon by a sandstorm the likes of which are only seen a few times a year. 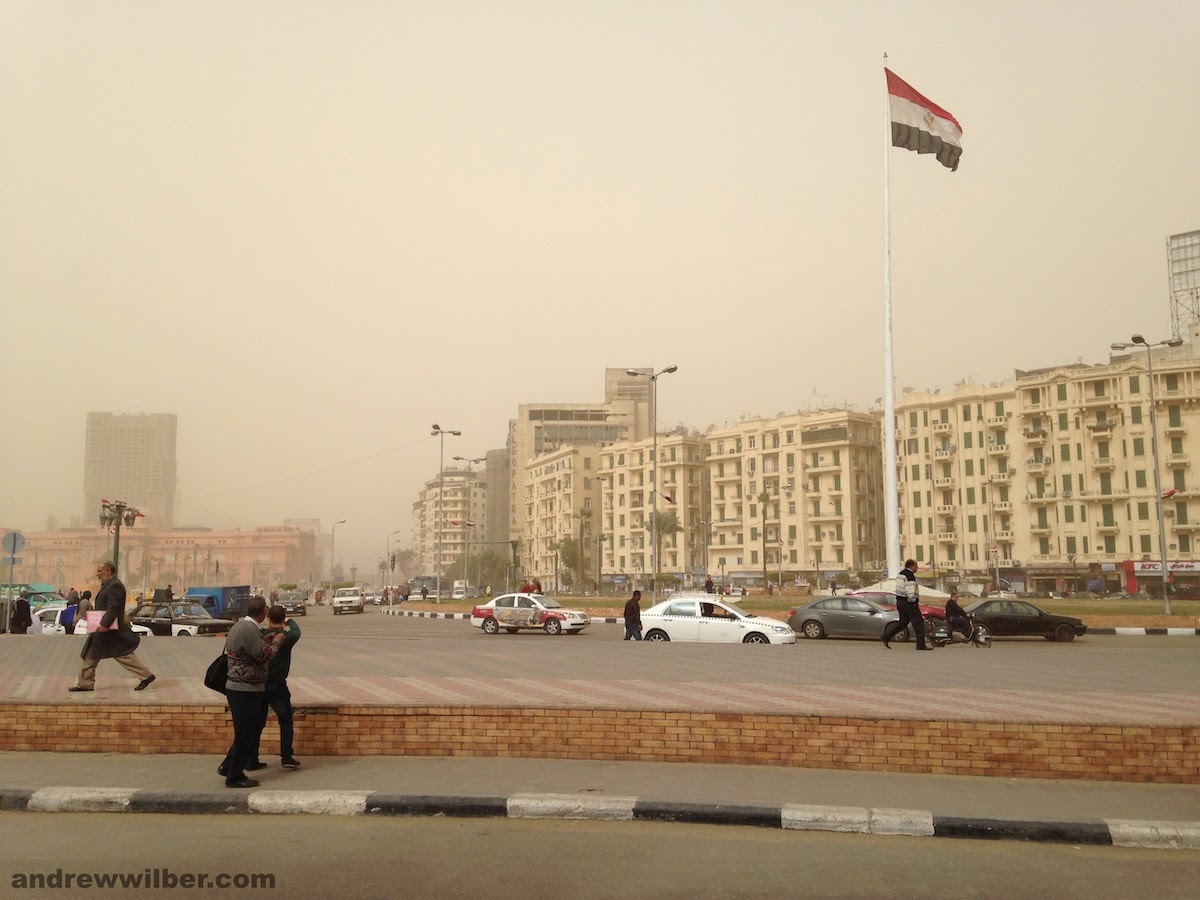 Determined to see Tahrir square, the place I'd heard so much about on the news since my first time in the region almost four years ago, we pressed forward on foot past the gauntlet of special forces and into the choking, blinding grit. Wen we finally made it we spent an extremely uncomfortable minute gazing around. We then asked a passerby to take our photo––and immediately felt terrible about it––having someone take our smiling picture at the sight of their as yet unresolved national tragedy. 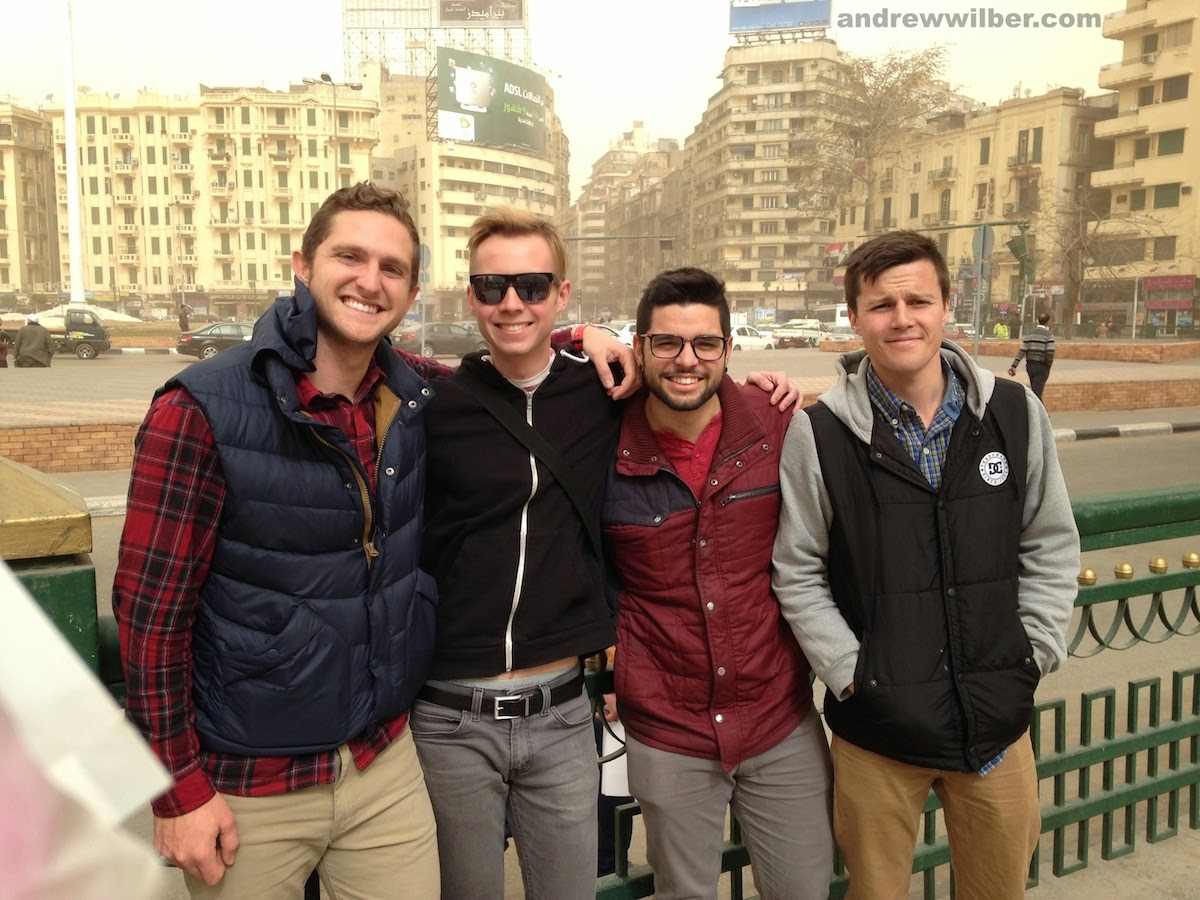 Then, feeling emotionally and respiratorilly exhausted, we piled in another cab. Naturally, we got stuck in traffic again, and the driver––an unemployed electrical engineer and member of the country's increasingly marginalized Christian minority––spent the 50 minute ride telling us his perspective on everything that was wrong with the country. 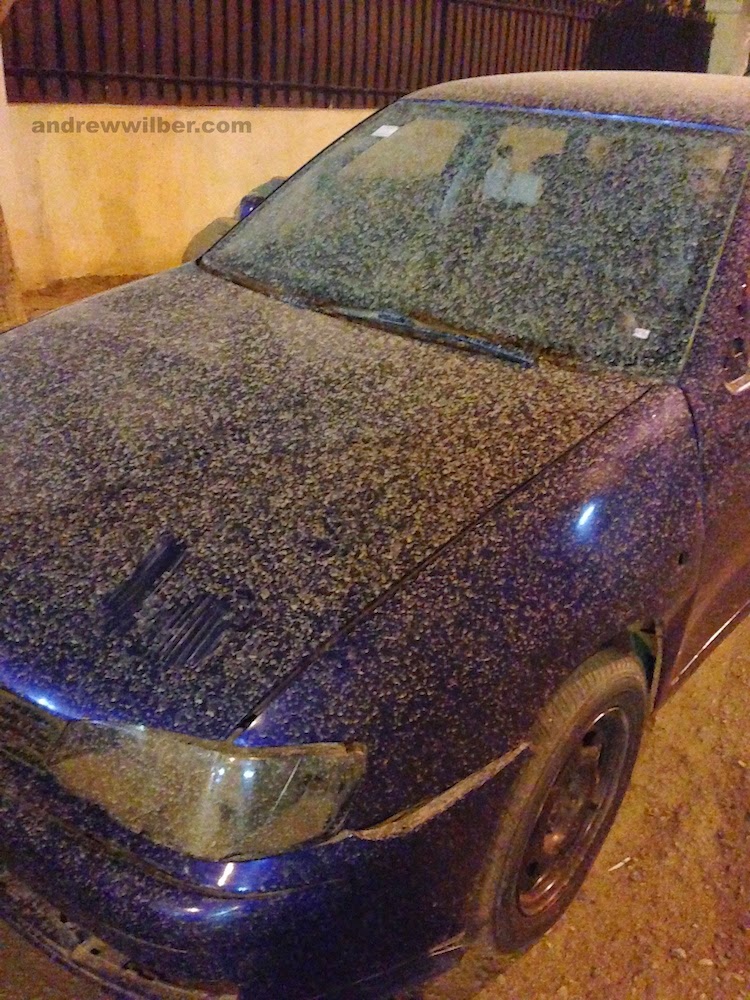 We arrived at dark and during a power cut. To cheer up we, we went out for pizza a few blocks from our flat and then started to walk back to watch The Mummy on a laptop. The dust storm had got worse still, to the point that trees, cars and sidewalks were all coated in the stuff and the night air illumnated by street lamps had a strange, hazy glow, almost like walking down an empty street back in Corning or Wellsboro on a night with gently falling snow. It would actually have been quite peaceful if it were snow, and not the tiny bits of a country disintegrating. 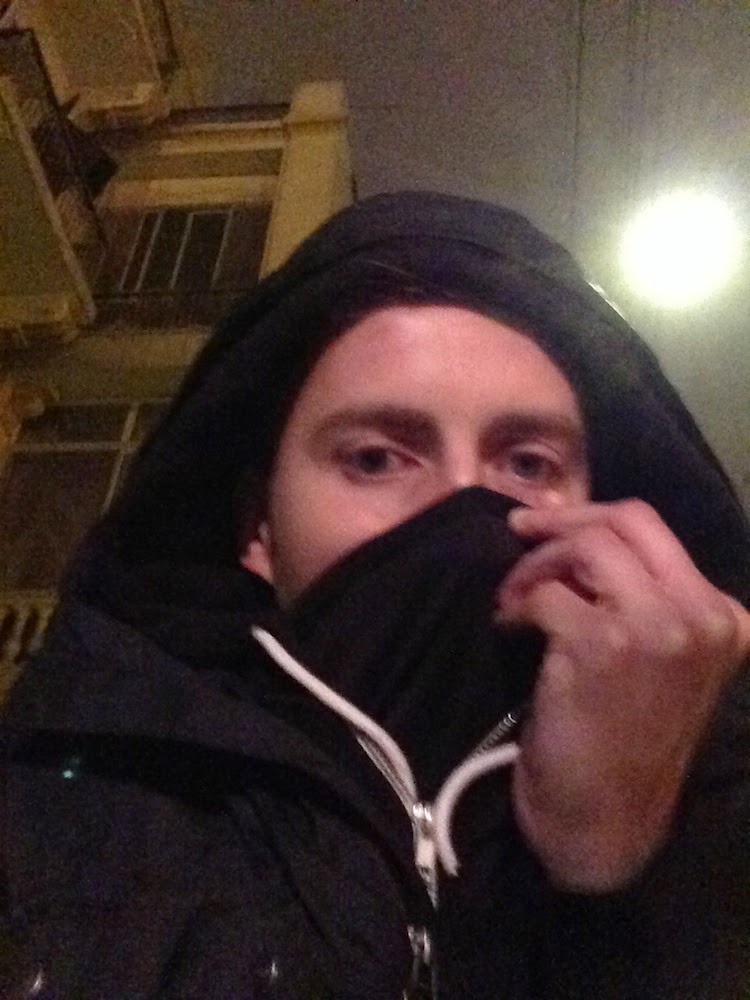 How to get the internet

In Beirut, there are really only two ways to get decent internet. One, is to pay for it in the form of cellular data at the rate of about $16 per gigabyte. The other is to sit in extremely posh cafe’s who’s owners likely have some sort of relationship with the right people and order expensive espresso drinks all day while you use their wifi. In the end it probably works out to about the same price, but with one option you get complimentary espresso drinks.

Today, as I write this, I have chosen the second option.

Except that I also would like to apologize for not writing in a long, long time. A two week stint in Germany, the incomparable adventure of moving into an unfurnished apartment in Beirut and countless anecdotes along the way have all passed unwritten about. I’ve been busy––and tired––to be sure, but I’ve also been unmotivated and lazy as well.

Over the next month and a half, I will––God willing––be going some of the most spectacular places I’ve been yet. It’s going to be crazy, and it’s going to be exhausting. But it’s also, sometimes, going to be interesting, and even beautiful. And I promise to try to be more disciplined in trying to share some little parts of that on here.