Running in Lebanon is rather dangerous. Even registering for a race can be somewhat hazardous.

Today I went downtown to pick up my number for the Beirut Marathon 10k event this Sunday and found the entire district was blockaded in what looked like preparation for the D-Day invasion. As it turns out, the invaders were about three dozen posh looking Lebanese, protesting that the national parliament a few blocks away had just voted to reelect itself for two more years. The most dangerous person there was probably the girl with the clipboard [right foreground], yet I still had to run the gauntlet of the Lebanese Army, Internal Security Force, six US Humvees, UN Peacekeepers, and about 200 men with M-16s [not pictured, because they don't like it] to get to the ritzy Beirut Souks shopping plaza where they were doing pre-registration. 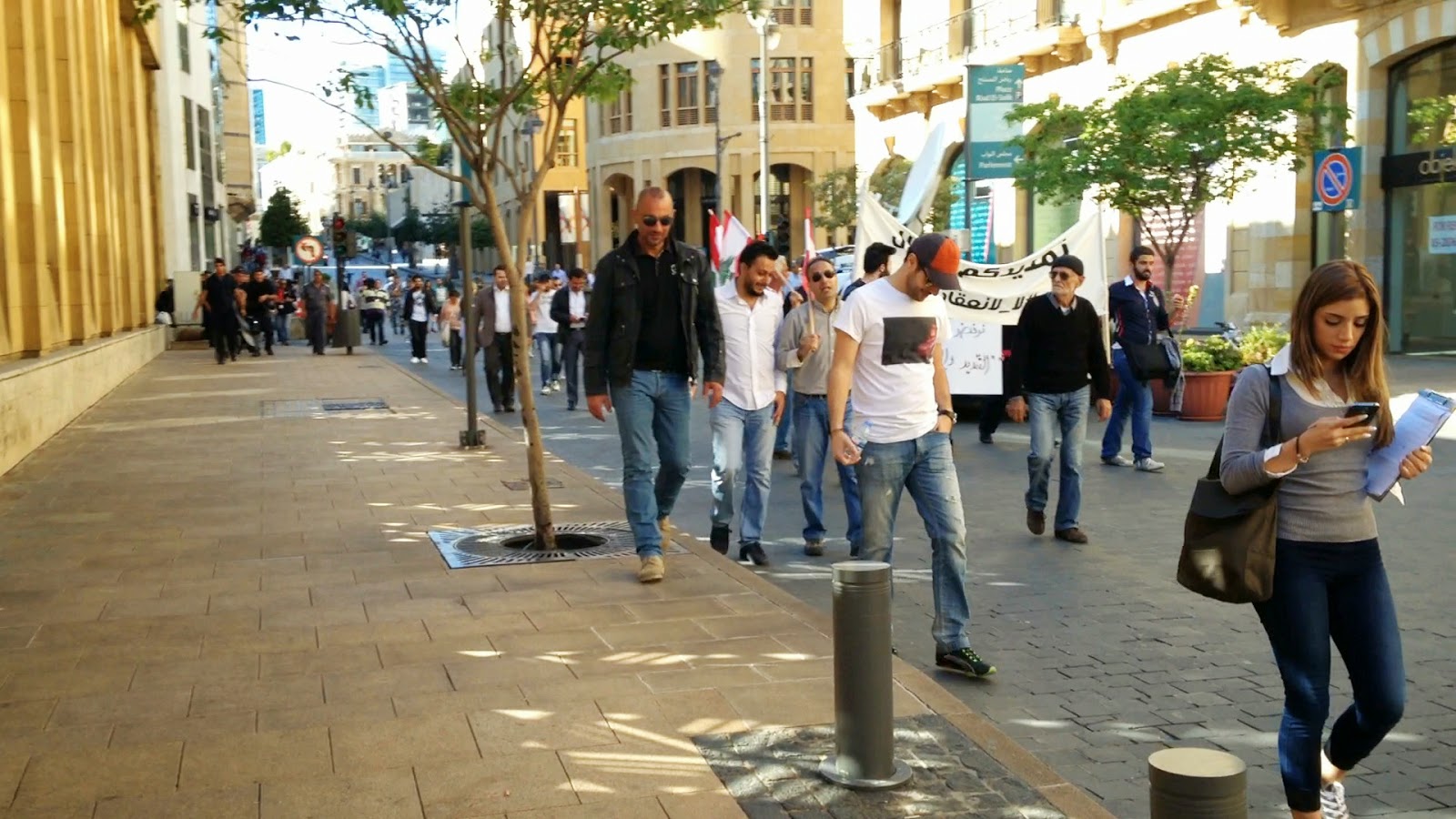 It honestly wasn't bad when I lived down in Gemayzeh in a hostel. Then there were actually sidewalks. That is, when they don't completely block the sidewalk to put up a billboard advertising the race you are training for, forcing you for one horrifying second to hurl yourself into the right-most lane of a four-lane highway. But since I moved up the mountain things have got exponentially worse.

There is now nothing but miles of extremely steep, twisting road with barely enough room for two small cars to pass each other and no berm at all, but on which cement trucks and transport buses make up most of the traffic. There are some parts where, when walking, you basically have to just press yourself against the cliff-face, close your eyes and pretend you're somewhere else as a diesel semi-trailor grinds past you nine inches away. 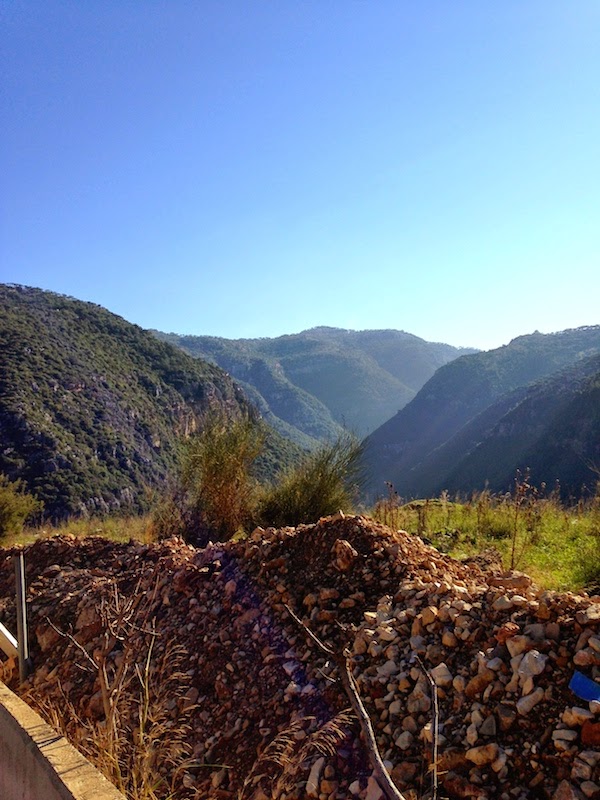 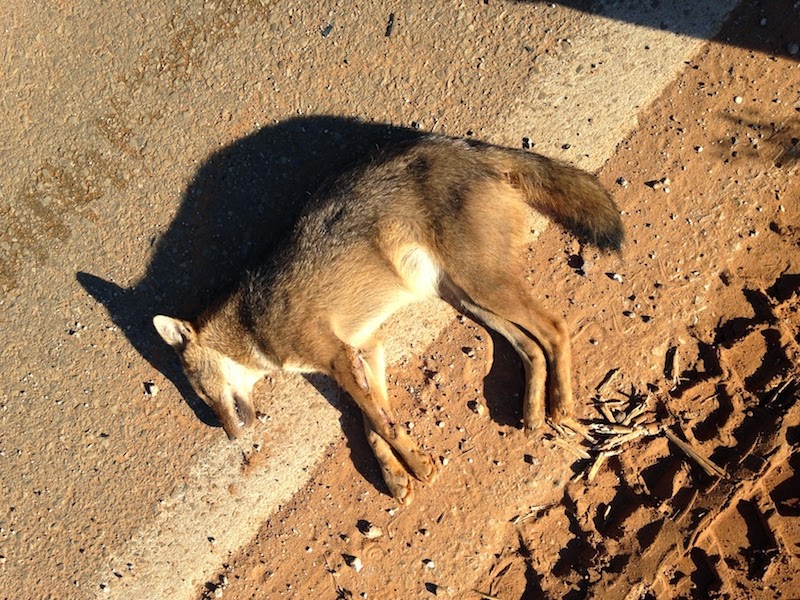 But every silver lining has its cloud.

Today I helped tutor some Syrian and Iraqi refugee students at an after-school program run by a friend I met at Arabic school last month. The main reason I came was actually to help him and some other friends get back to my apartment on the mountain for a long-promissed dinner that evening, but I was assured I'd be helping the students with only English grammar and the Arabic alphabet. An hour of algebra homework later, and we were piling into my friend's Peugeot hatchback.

I don't have a car, so I'd only ever taken the bus on the 30 minute (without traffic) drive from Beirut up to my place, so just getting to the base of the mountain was somewhat stressful, and could really be a post unto itself. We made it, though, and after getting on the right road at the roundabout at Mkallas, we headed up the mountain and all breathed a deep sigh of relief.

Then the car broke. 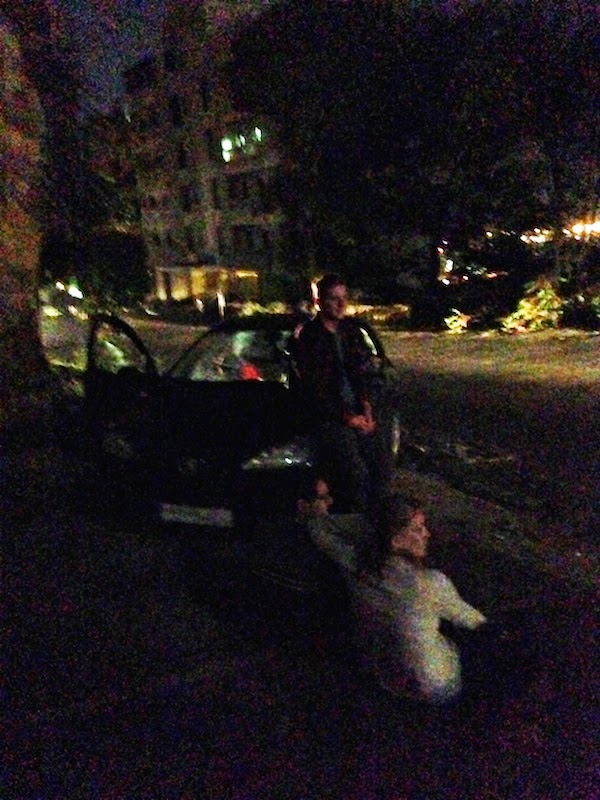 After watching a YouTube video on how to pop the hood of a Peugeot, pouring several liters of water into the radiator reservoir, and watching them trickle down the highway back toward Beirut, we discovered that the hose connecting the radiator reservoir to the radiator was ruptured. I'd always rather wondered what it would be like to get stranded on the side of the road in Lebanon. So it's almost a relief to have finally experienced it now. It was also good that it was within a few––albeit extremely steep––miles of my apartment. So after convincing everyone that pouring water all over the red-hot engine block was not a suitable substitute for a functioning radiator, we pushed the car about 40 ft. uphill, abandoned it, and jumped on a passing bus.

I felt quite bad about my friend's car. But dinner was delicious.

And after a succession of Almazas, sitting on our balcony playing guitar and chatting as we looked out over the sparkling on-off lights of Beirut and its suburbs 1,600 ft. below, I felt quite alright about the whole thing. Even the algebra.

As it turns out, though, driving here is still worse than running. And that's really something to feel thankful for.