One of the many funny things about Lebanon is how compartmentalizable it is. It's a tiny country, yet there can be a vast array of situations, moods and events from one neighborhood and one village to the next. People can seem to go on with their normal lives without thinking much about what's happening a few miles away.

Today some friends and I wanted go to Byblos to see the Crusader castle there and maybe go to the beach. We caught a bus to the place you can catch another bus headed north along the coast and, after drinking some juice, found one headed in that direction.

I was the first one to the door and was a little hesitant to get on with my group of seven when I realized the entire vehicle was filled with Lebanese soldiers. One of my friends reminded me, though, that there is no such thing as "too full" here––indeed, last night I was in a five-person taxi with eight people, one sitting on the drivers lap and working the clutch while he shifted––and we piled in.

As the bus pulled away, there was some commotion amongst the troops as one read something he'd just received on his phone. There was some shouting and the name of a city repeated over and over again.

As it turned out, there'd been a great deal of fighting in Tripoli today, with artillery and airpower and all that stuff––between alleged IS fighters and the Lebanese Military. A number of soldiers and a civilian had been killed by the time the girl next to me pulled up the local news on her phone––and these guys packed into the bus with us, were reinforcements heading into combat.

Byblos is pretty much exactly halfway between Beirut and Tripoli, so it wasn't as if we were heading into the immediate danger zone ourselves. Still, it was strange to think that these guys, some of them laughing and talking with us, were headed to war on the same bus we were taking to an afternoon of sightseeing.

We got out when the driver announced we were at the stop for Byblos, and spent the afternoon as we'd planned. We went to an outdoor restaurant where I ate a gigantic and entirely disgusting chicken liver shawarma. We meandered around a crusader castle. We drank espresso and ate ice-cream and watched the sun sink into the Mediterranean Sea as a couple of newlyweds had their portraits taken by a team of about seven photographers.

Were it not for the helicopters and––one fighter-jet from whence I know not, since Lebanon doesn't have fighter-jets––that periodically sped north over our heads, I could have completely forgotten that 45 minutes up the road, people like those guys we road on the bus with were locked in a deadly stand-off in the middle of Tripoli.

In fact, after the helicopters stopped coming for awhile, I think I did forget about it. And that makes me feel kind of bad.

If I were at my home in Pennsylvania and found out people were being killed 50 miles away in Williamsport I doubt I'd spend the day doing much but thinking and praying for the people there––and possibly trying to get further away myself. Here though, I went a little closer, and strolled around on the beach.

When you look at a place like this from the outside, you can easily think it's terrible how people can just go on with their normal lives with so much suffering around them. Today, though, I realized I can do it pretty easily myself. 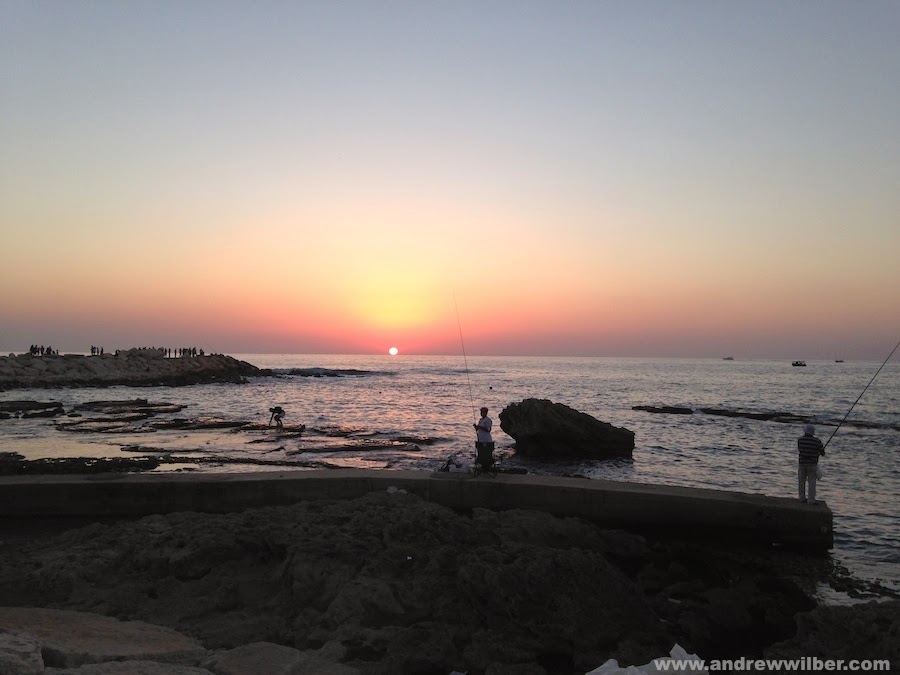