Pennsylvania & New York As They Ought To Be

This evening I read that the proposal to subdivide California into six separate states has apparently gained enough political traction to be considered on the state's general election ballot. I was previously unaware of the plan, but as I thought about it, my reactions were 1) I'm glad I got to drive through it while was still united, and 2) There's no way it will ever happen, and 3) That's too bad, because it really makes a lot of sense.

But why should only Californians be able to entertain ideas––however improbable––that make sense. Indeed, the West Coast is far from the only place that could benefit from some state-level territory restructuring to make theoretical maps match modern realities.

So, taking into account cultural norms, political leaning, physical geography, tax revenue, linguistic dialect, division of industry, and a variety of other factors; not to mention the simmering frustration of many of my friends in Pennsylvania, New York, New York City, Philadelphia and elsewhere, I began in my mind to redraw the boundaries of the two states in what I feel to be a more equitable manner.

And I give this: Pennsylvania and New York State (and a sliver of New Jersey) as they ought to be: 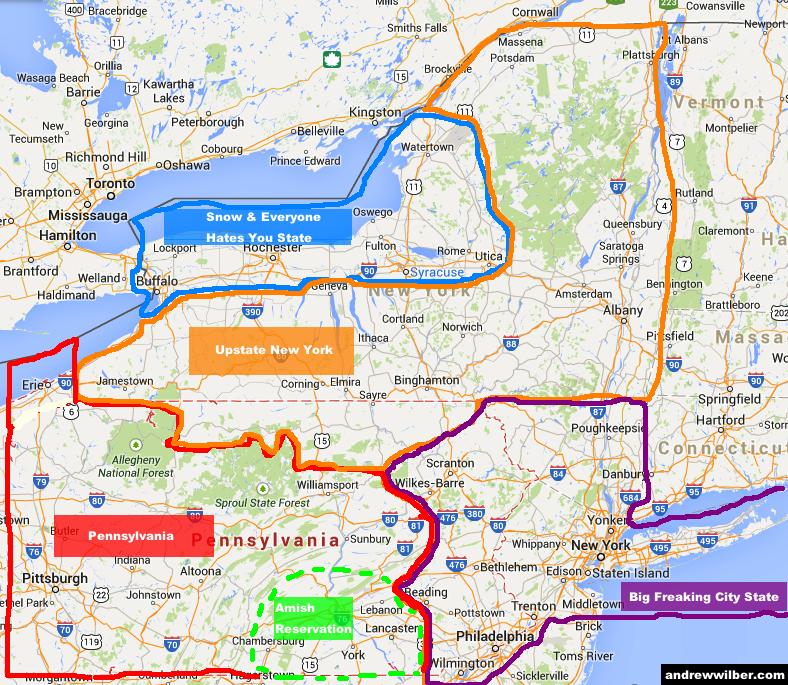 Feel free to let me know what you have any suggestions, or draw your own if you think mine is completely crazy.

It feels awe-inspiring to read such informative and distinctive articles on your websites. benzo detox dc

I am really appreciating very much by seeing your interesting posts.Best Rehab PA