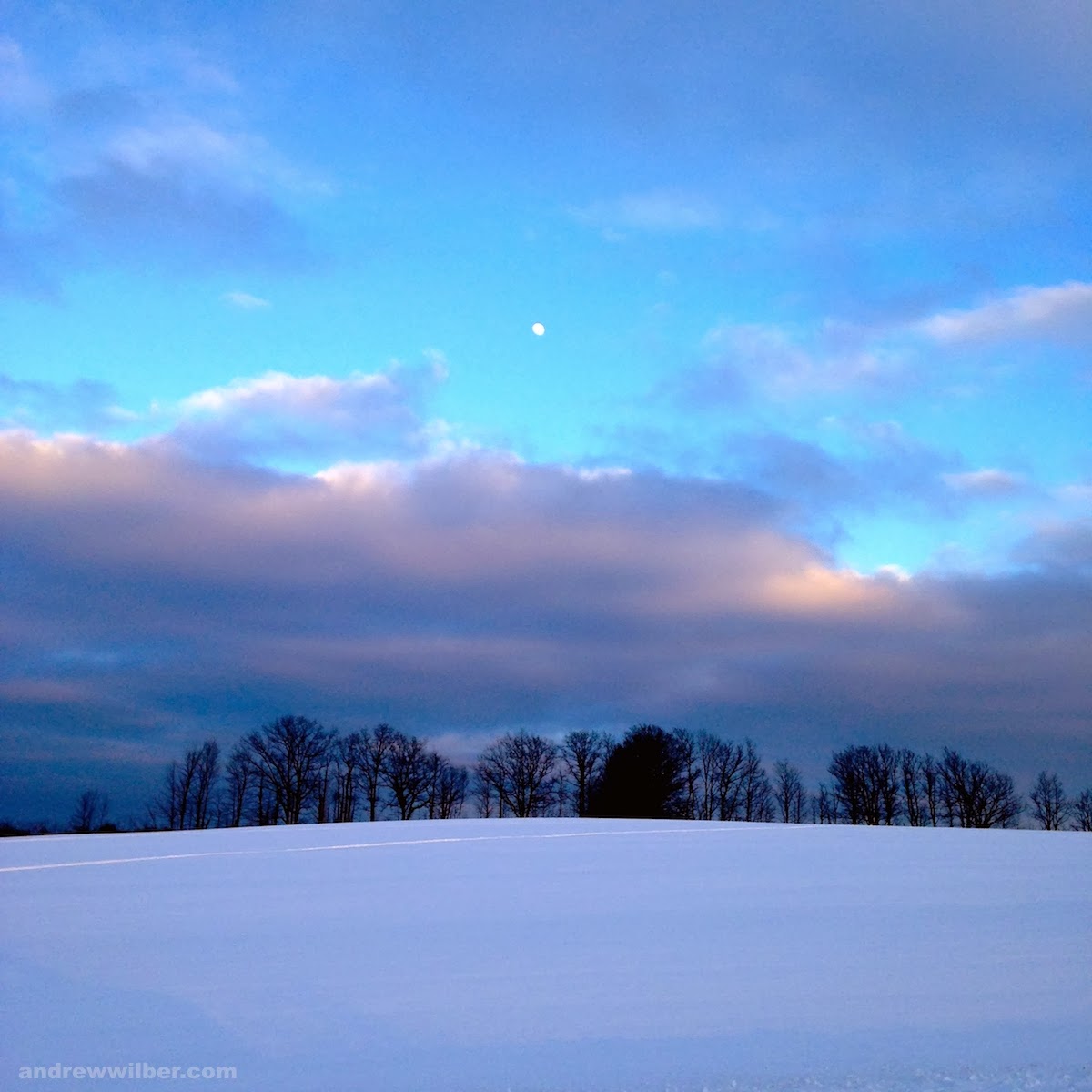 This morning I got on Amazon to check my affiliate stats for the day before as I usually do while I'm eating breakfast. Before clicking through to my account, though, I saw an advertisement for swim trunks, and thought: "I need some new swim trunks"––the last pair I bought at an H&M in Austria fit me at the time, but since 2009, either they've stretched, or I got skinnier, which has led to some obvious problems.

Soon, I found myself scrolling through pages of swimsuits pondering the same question Adam did when he took the fruit from Eve's hand and bit it: Board-shorts, trunks or racing jammers (briefs should never be a consideration) and wondering what would be most comfortable for a long day at the beach.

Then I wondered something else: Why am I looking at this now?

I'm sitting in front to the computer, in a sweatshirt, flannels and skullcap, two feet from a space heater, and still shivering. It's about 10°F outside, and in all likelihood, it will be another month and a half before any of the snow that's clogging my driveway melts, and another two months after that before I feel like getting anywhere near any body of water for 200 miles.

Obviously, it has been a hard winter. Even the crankiest old people I know who are usually inclined to say: "In my day, we had winters that were..." now admit to that fact.

We've had snow-cover consistently since before Thanksgiving. I've lost count of the number times it's been bad enough to not be able to drive, and while we certainly haven't had the deepest one-time accumulations I can remember, this one wins for sheer relentlessness.

It usually gets cold up here in the hills, but it used to always be a novelty when the mercury actually dropped below zero without factoring in windchill. Something that happened a couple times a year. Not this winter. It seems like most mornings I go out to start my car it's in the single digits or worse. It's got to the point where the other day I turned it on, read 13°F on the flickering dashboard display and thought: "Well that's nice," with complete sincerity.

On a national scale:

Heating propane has reached a record high, and even regular natural gas has hit the highest level since the fracking boom in 2008, prompting calls for emergency FERC intervention to divert more fuel north.

Meanwhile in the south, civil infrastructure has been stretched to the breaking point, snow related car accidents have skyrocketed, and Lowe's is actually considering selling snow shovels.

Okay, I made the last one up.

On a personal scale:

I flew off the road for the first time in my life.

The pipes in my room froze. Twice.

I've 1) become something of a master at getting cars unstuck from snowdrifts with nothing but a shovel, and 2) nearly set my clutch on fire more times than I can recall.

Don't get me wrong with all this. I really like winter, and snow, and cold and all that. I like it until about January, and this year was no exception.

Now, though... now I'm browsing the men's swimwear section of Amazon for no logical reason at all.

I don't usually care much for my dreams. The happy ones tend to be flat and illogical and the vivid, realistic ones are almost always nightmares. Last night, though, I had one that wasn't really either of those things. And it made me stop and wonder.

Only in my dream, these things were all wrapped together in one, concurrent universe. I can't really describe it, because parts of it were rather graphic. I will at least tell you, though, that it involved the Gulf of Aqaba, a girl who tutored me in a subject I was very bad at my junior year of college and who I had a terrible crush on but never asked out because I figured she thought I was retarded, and a Nimitz-Class aircraft carrier.

It was very strange.

Even though it was a universe that never existed all at once, I can't help but feel that––in some distorted way––it's my mind mirroring the spot where I am right now. Kind of at a place where whatever is behind me up till now doesn't really mean much or have much connection to the present, and a lot of different paths are in front of me, but somehow I feel like they all lead to the same place.

Anyway, sorry for the pseudo-prescient mind journey thing. You should read some Frank Herbert. He does a better job at it than me.

So for now, it's back to waiting.

14 foods I love, but would never eat if I wasn't single

Baha, there is no such list, and if there was you shouldn't have been interested enough to read about it.

Early this afternoon I found myself on the campus of Mansfield University. Somewhere I hadn't been in a very long time. My reasons for being there were two-fold: First, I wanted to confirm that a $4,000 balance they errantly claimed existed on my account four years ago was in fact errant, thus allowing me to get my transcripts. Second, I wanted to catch up with an old adviser I hadn't talked to since I suddenly and mysteriously disappeared in 2009. Happily, both were successful.

While walking across the campus, I noticed a number of changes, but one thing struck me in particular: There seemed to be many more attractive women there than there had been when I was a student. This led to some amount of speculation on my part as to why this would be, and I was actually about to post something about it on Facebook. Then, as usually sometimes happens, I fortunately realized that no matter how I worded it, the post would likely come off as offensive, insensitive, and generally contradictory to everything I believe is important.

And then I thought that, if I did post it, I would probably have to delete it, and then post another status apologizing for it, as I sometimes see other people do after they have had some lapse in discretion. Something like:

"I'm sorry for my previous status. I wasn't thinking, and I'm terribly sorry to anyone I offended."

And then I had the thought: What if I were to just post an apology, without ever posting the thing that it was for? What would people think I had said? How would they react? Would they attribute it to something I actually had posted that I didn't think could even be construed as questionable, but it turns out they did? Would they assume that I had said something much worse than what I was even considering saying?

It really kind of makes me want to try it just to see what happens.

But then I had yet another thought: What if I were to expand this to real life and my interactions with people in general? Basically, what if I just started pulling people aside and making vague but leading apologies for things that never actually happened?––and then seeing how they react. I think I may try it.

"Guys, I just really wanted to apologize for what I said about you all to the group the other day. I didn't mean it at all. I was just really angry and not thinking. I hope we're all still friends."

"Hey I'm really, really sorry about your dog, Sarah, I just have this problem with animals touching me and I lost control for a minute. I hope it feels better already."

"Thank you guys so much for picking up my bill back there. I had no idea my cards were all maxed out and I'm sorry for putting you all in that situation, but anyway, it was really cool of you."

"Hey, Tom, I'm really sorry about the thing that happened with your car. I just wasn't paying attention out there. If insurance doesn't cover you just let me know, okay!"

"Jill, I'm so, so sorry about last night. I know we'd both had too much, but that's no excuse and it was all my fault. I took things WAY too far, and it was terribly inappropriate and too soon. I hope you can forgive me."