There's Still a Pig in My Park

It's been one of the mildest, most beautiful autumns I can ever remember in the north, and if today was an exception, it was only because it was even more exceptionally mild and beautiful. Thus, I felt it was a good opportunity to return to that hallowed piece of land at the intersection of Coryland Road and Coryland Park Road, atop Coryland Hill, whimsically titled: Coryland Park. 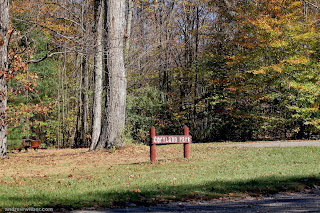 This park, made famous in my late spring post, The Pig in the Park, was the site of a horrific crime mystery involving a drawn and quartered porcine that I stumbled upon during a run. At the time, after recovering from the shock of the traumatic discovery, I began to speculate not only about how the unfortunate animal had come to be there, but also how long it would stay. Based on previous observations of the park, I wagered at least six months.

Over the course of the summer, I continued to see him on successive runs. Each time he was a bit more bedraggled looking than the previous. At one point his legs disappeared. Then around August, his head became separated from his body, and then in September disappeared altogether. Despite the punishment though, he continued to doggedly persist. So since it has now been almost exactly six months, I figured it was high time I returned to the park to make a final assessment and documentation for benefit of the waiting public.

I am pleased, therefore, to provide you with this photo, taken just hours ago: 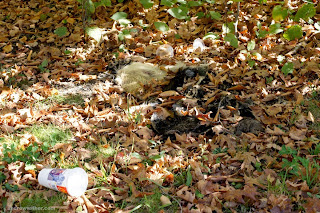 While obviously a bit worse for the wear, I think it's safe to say our friend has become a permanent fixture of the park. That leaves only one question. The original question:

Who put the pig in the park?

Could it have escaped from the metropolis sized corporately owned pig operation known euphemistically as "Pine Hill Pig Farm" just a mile down the road and been killed (and apparently eaten) after only making it to the top of Coryland Hill?

Could it be it was brought there with the express purpose of killing, butchering, and cooking on the charcoal barbecue, thus disproving my long held belief that no one ever actually picnics at Coryland Park?

Could it have been something much more sinister? A pagan rite perhaps? Or even darker, a publicity stunt by some local elected official? That one becomes more plausible the more I contemplate it.

Whoever put the pig in the park must have known I run past at least twice a week, and it would also be a safe bet that seeing it, I would write a blog post about it. Since one stroke of my keyboard has been known to cause international media firestorms and is believed by some analysts to have largely pre-decided the results of the 2008 presidential election––a phenomenon discussed in hushed tones within the Beltway as "the kingmaker effect," this conniving civil servant may have been hoping to bring public attention to the underutilized taxpayer-funded amenities of Coryland Park, justifying his or her own existence. This person almost certainly had backing from local landowners with detailed plans to profit from the busloads of Asian tourists with Mickey Mouse hats and DSLRs that would descend upon the place.

A textbook example of pork-barrel politics if there ever was one. And that, my friends, was the worst pun in the history of the universe.