So Wake Me Up

This afternoon I was driving home after spending the night at my parents' house. Being at a loss for what music to listen to, I switched on the radio and was greeted by the song "Wake Me Up" by Avicii. I'd heard the song several times before as a friend of mine was really into it for awhile, but I'd never really listened to the lyrics. They go, more or less,


I tried carrying the weight of the world
But I only have two hands
Hope I get a chance to travel the world
But I don't have any plans....
So wake me up when it's all over
When I'm wiser and I'm older

A few weeks ago I confided to a friend that I've really been feeling something like that about my life right now for some time. Basically like there's a hope things can change for the better––but probably not for awhile, and the next two or three years are just something I have to dig in for and try to survive.

Is it at all possible that I'm wrong though? Or that I at least drastically overestimated the time-table?

Last week I was feeling particularly awful, and it caused me to reflect on some things I'd been meaning to do this summer but hadn't had the time or energy for. The biggest one that came to mind was visiting a couple friends of mine from the semester I spent in Italy (what is it, nearly FIVE years ago now?!) and had only seen once since. They live in Brooklyn now where their band is based––which, while for most practical, cultural and aesthetic purposes is like a different country, isn't nearly as far away.

So, I bought a Shortline bus ticket from the coffee shop I order Americano's from everyday I'm in Corning, walked out to the curb, and about seven relatively miserable hours later, emerged blinking from a hole in the sidewalk in East Williamsburg. 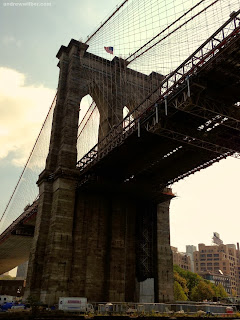 The next 48 hours reminded me a bit of some dreamy version The Layover with Anthony Bourdain; stuffing myself with terrific steak, sampling designer prepared coffee, ducking in and out of hipster bars and recording studios pretending like I belong, all climaxing in a prolonged night out––the last four hours of which I really don't remember but my credit statement suggests must have been highly enjoyable. All that was really just the setting though. The ambiance, if you will. What I think I'll really remember from those couple of days is getting reacquainted with some people who were a memorable part of a very different and significant (if short) section of my life.

Looking back at times in my life that were different always gives me a different perspective on the present, but that's nothing compared to the paradigm jog you get from meeting someone who was with you then and looking back at it together––and then where you both are now. It forces you to realize just how much and how fast things can change. That's what it forces me to realize, anyway. Sometimes it can be sad, but other times it can be inspiring. In the case of my friends it was definitely inspiring.

It'd be too complicated––and intrusive––to go into all the details, but the point is: It was encouraging. It took me back to a time that I generally view as a better one, and then brought me forward to the present with a new take on it.

So sitting on the bus home last Saturday going back to my life that I'm tired of, I could, and do feel like the next few years are something that I wish––like the night before––I could just wake up from and not remember. At the same time though, and for the first time in awhile, I had to acknowledge the possibility that maybe they won't be like that.

Maybe, just maybe, the next two or three years could be the best yet.

For the first time in awhile though, I feel like there's a maybe.

Love your posts! I don't think you know how similar we are in all of this.

there is always a maybe, i hope. cause i feel the same way about the next 2 years of my life. but it's 2 years of MY life. so i'm determined to enjoy them & make them good...even if the only way to do that is drink good coffee. ;)

Thanks guys. It's good to know I'm not alone.