Crash and Eddie - The Orphan Opossums

Disclaimer: Since adopting and caring for a wild animal is illegal in Pennsylvania, the events described in this post are obviously fictitious––the beginnings of a screenplay for an animated motion picture in fact, the photos being nothing more than high-quality illustrations from the preliminary storyboard.


Late yesterday afternoon I was taking Bella, the dog, for a walk when I noticed something lying in the middle of the road. As we neared, I realized it was an opossum that, rather than playing opossum, was truly and completely dead, its neck broken by the front tire of a large automobile. Since it was in the middle of our road, I picked up a nearby log and pushed the hapless creature off into the ditch. In the process it flopped over on its back and I was horrified to see something moving.

As it turned out, this opossum was a mother, and being a marsupial, was carrying its two pre-adolescent children in its pouch when all the unhappiness with the car occurred. From the looks of things, the accident had happened less than 45 minutes previous, and flies and bees were only beginning to discover the dead animal and its two very much alive young. 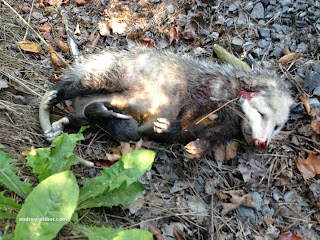 While I do kill animals from time to time, I've never been able to stand seeing anything suffer, so, unable to make up my mind about what I should do, I went back to the house, grabbed a 12 gauge shotgun, a pair of gloves and a mask.

Plan A was to turn the group into an unfeeling pink mist. Plan B––well, it turns out I'm still figuring out what plan B is.

Donning mask and gloves and pulling my hood over my head, I approached the odd looking mess in the ditch. After a moment of pondering how one should go about doing something like this, I simply grabbed the babies by their tails and yanked them kicking and squirming from their mother's orifice.

They are currently cuddling on a hot beanbag and eating applesauce in the garage below my room. 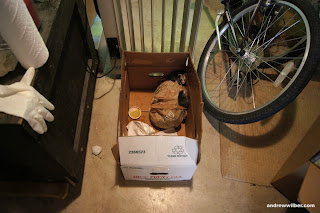 I spent an hour or so doing some research and came to the conclusion that these two are around 66 days old - as evidenced by the fact that they're walking about and able to drink from a dish. That was a bit of luck for them as there is no way on earth I was feeding them every two hours, 24/7, from an eye-dropper as the protocol apparently goes for orphan opossums younger than that.

From the moment I pulled them out of their Mom and they started sneezy uncontrollably (till I got them on the beanbag) up to now I haven't been at all optimistic about their chances of survival. I'm still not sure if I'll be able to get them to eat solid food, and since the only thing you're supposed to feed them before they can eat solid food is a special squirrel baby milk replacement formula that I'm not spending money on and probably wouldn't be able to find in time, chances are they'll starve to death soon if I can't get them to down something more than pureed apple in hot water. Or they may die of some disease. Or I may die of some disease. But at any rate, they won't be getting eaten alive by centipedes while clinging to their mother's dead body... and somehow I feel like it's an improvement over that.

Due to my lack of optimism, I wasn't going to name them. However, a friend suggested Crash and Eddie, after the two opossums in Ice Age, and it seemed too perfect to resist. So, for however short a time, I give you Crash, and Eddie: 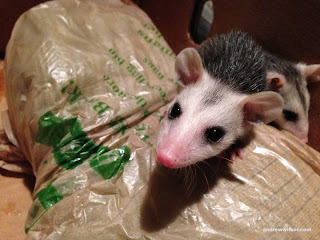 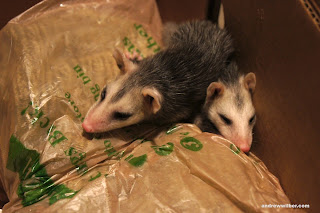 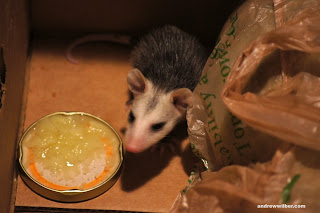 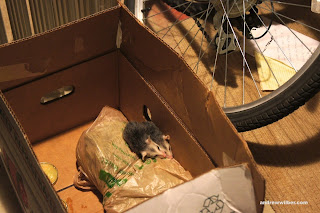 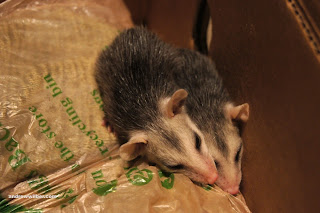 They actually seem to be doing remarkably well. Climbing all over the place and coming out to drink without me prompting them to every hour or so. So we'll see.

you are a good man Charlie Brown. Seriously, I am proud of you.

They are quite adorable. You're a good human being. I wish Crash and Eddie all the luck.

you have baby opossums.

*Maryah gets huge eyes and says:* I'm so proud of you. All my opossum friends thank you from the bottom of their ugly tails.

Oh, and you might begin to find individually wrapped chocolates lying around in random places, but I've always found that they're more prominently placed in ditches and rock walls.

Oh wow, Misha and I will have to commence operation squirrel milking...