Summer of the Unexpected

Since we went kayaking on Keuka Lake early last summer, my friend Alex and I'd been swearing that we'd do it again. And when my parents moved to a flat on Seneca Lake that happened to have a bank next to it perfect for launching kayaks, we'd been swearing we'd do it there. Somehow it made it all the way to the end of September without us having done it, though.

I got to my parents' apartment to find the trees around the lake were already starting to turn and the water was a lot colder than last time I'd been there. It was a stunningly beautiful day though. One of those where it looks like fall but feels like summer. One of those that––if you've lived around here for any amount of time––you know just might be part of the last beautiful week of the year.

So we launched the kayaks and headed for the opposite shore of the lake. 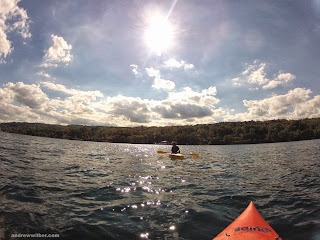 Wanting to find Hector Falls, we attempted to follow The True Love––a tour schooner that we figured would be heading that way––at an inconspicuous distance. But then we accidentally passed it, which actually seemed kind of awkward at the time.

It was well worth it for the falls though. With the kayaks we were able to slip up the only inches-deep stream that flows out from the falls to the lake and see it from a perspective you don't really get from the the road or the lake. 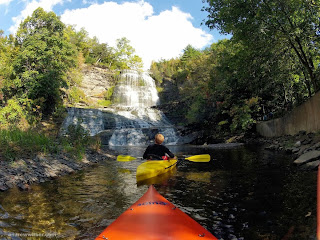 Gliding out we turned south along the mostly uninhabited eastern shore of the lake. From there it's easy to see why it's uninhabited: It's basically a cliff. 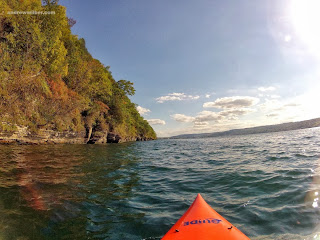 While there may have been no houses or docks, there were lots of little hidden beaches and outcroppings along the base of the cliff. Isolated little spots that are only accessible from the lake, even though they're part of the land. One of them looked interesting enough that we decided to stop on it and explore.

We found a campfire and some benches improvised out of drift wood. I thought it looked pretty romantic and was probably the planned location of some tryst. Alex though declared that it was obviously intended for occult animal sacrifices––and I decided not to dispute his hypothesis. 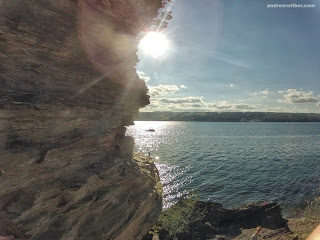 It was a beautiful day, and a fun adventure I'd been looking forward to for awhile.

This summer has been full of adventures, but mostly ones that I wasn't looking for. I used to always think that was the best kind. I'm much better at being spontaneous than I am at being intentional, and I guess my life this summer reflected that. Lots of experiences I didn't have the slightest expectation of having just this spring. Of course, some of them weren't entirely pleasant. Others were fantastic, but didn't end how I'd hoped they would end. Well, one in particular.

Even so, I'm very thankful. When you find things that you weren't looking for, and they're good, I think that's the only response that you can rightfully have. Especially when you tend to approach the world in the way I just mentioned.