Two and a half years

I originally posted this as a kind of bloated Facebook status on August 28, two days ago, but enough people seemed to get something from it that I've decided to post it here. 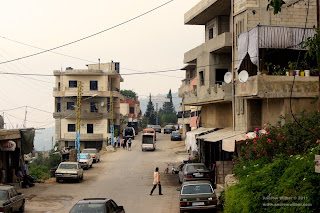 Thinking about the people in Syria today.

I remember two and a half years ago when my flight plans almost got ruined because the civil war (I don't think they were calling it that yet) had just started. My life has changed so much in the last two and a half years. I've gone some great places, met some wonderful people, graduated college, made some mistakes, had some adventures, etc.

It's an almost incomprehensible thing to me that in the same two and a half years since I got my passport back from limbo at the Syrian consulate and went on with my plans and my life, most of the people there have known nothing but the same, ever-escalating war. For someone in Syria, the best case scenario is that the last two years have been really boring, and frustrating as you've had to keep your life completely on hold and wait to see what happens. At worst, it's been a prolonged, spiraling nightmare that I've lived a much too sheltered and anesthetized life to justly attempt to describe.

While I'm thinking of this on what is probably the eve of our country getting sucked into this war (if we haven't already), that's not the main reason I'm thinking of it. It's more just the realization that for the last two and a half years, I've had the luxury of not having to think of it.

But isn't thinking of it the least we could do? It's not an easy thing to think about. There's no apparent solution. No obvious right or wrong. No single person to neatly blame and be mad at. Only the knowledge that people are being hurt and no matter what action anyone decides to take they are going to get hurt worse. But they're people. Some of them are probably a lot like you or me. So if you have a minute to think today, I think you should think of them. And if thinking of them moves you to pray for them, I think you should do that too.
Posted by Andrew at 8/30/2013 09:29:00 AM No comments:

My life the second half of this summer has taken on an interesting pattern. It seems to look something like this: Go on crazy last minute road trip across America for a week or two, come home and spend a week scrambling to catch up on work that I wasn't doing while I was on the road, spend a week relaxing and swearing I'll never do anything or go anywhere again, and then going on another crazy last minute road trip across America. That's what I was doing last week: driving from Corning, New York, to Dallas, Texas.

When I told some very old and dear friends of mine––old as in I've known them for a while; they're relatively young––I'd keep them company on their move to Texas, I was expecting the drive down to be quite an adventure. Indeed, how could driving halfway across the country with four very little children and a moving van be anything but a disaster?

But then it wasn't. Everything went very smoothly. No accidents, no major wrong turns, the children were remarkably––dare I say uncannily––content to sit in the car for several hours between stops. I'd go so far as to say that for the distance, it was one of easiest and best executed family road trips I'd ever participated in. It was, however, the calm before the storm. The deep breath before the plunge. The eerie silence before... well you get the idea.

The second night after arriving found me sitting by myself in a plastic chair on the concrete patio of a deserted house drenched in my own sweat as I took another pull from a tumbler of cheap rum. Through the open door beside me a sleazy Mexican telenovela could be heard playing in the 103° living room which was only slightly less airless than the stifling darkness outside where I watched the large group of Puerto Rican teenagers across the street have a loud and enthusiastic party on their porch and wondered: Is this what it feels like to be a dissipated ex-patriot living in Tijuana, down on his luck and fleeing the demons of the life he left only to be haunted by new ones in the sultry, oppressive nights of this foreign land? Apparently it was very cheap rum.

The day we arrived in Texas was the second hottest they'd had so far this year. 107° Fahrenheit in the shade. Obviously, ideal weather for unloading a truck full of boxes and furniture. Unload it we did though, and three hours later Derrick––my friend––and I stepped into the coolness of the new air-conditioned home. The next day the air-conditioner broke. In two places. While Derrick and I (mostly Derrick) attempted to figure out what had caused the washing machine he'd just bought to explode, Nicole and the kids retreated into their air-conditioned car. And then the car died.

We managed to get the car working again, but when evening came and we had no word from the landlord on when the A/C would be fixed, my friends made the wise call to spend the night at another friend's house the next development over. Not wanting to intrude, and feeling the heat wasn't "that bad" as long as I refrained from moving anything but my eyes, I elected to stay behind.

The development fortunately had a pool, and around nine that evening I got the urge to go for a swim. I walked the block and a half there only to find the lifeguard staff shoeing everyone out for the night. Craving a relief from the heat, and perhaps some human interaction of some kind, I kept walking and ultimately ended up at a Mexican restaurant just beyond the community gate. It seemed everyone was at the bar, so I took a seat there and ordered a drink and some tortilla chips and salsa. 45 minutes later, my vodka and kahlua gone and withering under the advances of a heavily intoxicated Texan woman who would only admit to 47, I took my leave and walked back to the house. Which leaves me on the dark porch at 1:00am watching the Puerto Ricans across the street and imagining myself to be someone else.

The next day things looked up, however. I woke up and wasn't in Tijuana. I went down a water slide. The A/C repairman finally came. The car continued to work. Derrick and I even made an impromptu 40 mile drive to the Oklahoma sign on 377. In the past month, you see, the number of states I've never been in has dropped from most of them to just four or five. One of those was Oklahoma. So we drove to the Oklahoma sign. Why just the sign? Because there was nothing to see beyond the sign for several hundred miles. At least nothing interesting.

What was interesting was the drive back. We discovered that the late-night drive-thru attendants at Taco Casa don't really speak Spanish and fueled up at a gas station full of half-naked cowboys. 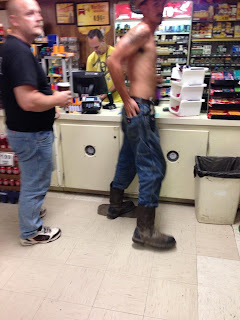 So now I'm back in Pennsylvania again, where I've spent the last few days trying to catch up on things. And now I'm at home, swearing I'll never do anything or go anywhere again. That's just part of the pattern I guess.

While the circumstances leading to my current situation of living in a large empty house but for a dog, a cat, three guineafowl and eight or nine chickens, are too complex, delicate, and likely to incur the wrath of numerous people against each other and ultimately myself to explain, I felt it might be in order to say something about what it is like in itself. That is to say, what living alone with a dog, a cat, three guinea fowl and eight or nine chickens is like.

The moment I step out of the car, hardly one foot is on the driveway when Bella, the black labrador, Jasper, our demon-possessed cat and eight or nine chickens––unnamed due to their expendability––rush at me. When, at a later time, I stroll out of the house into the yard, they all follow me. I'm like their great loving mother, or Dr. Dolittle, which is strange because I really quite dislike them all. Absent from these parades, quite ironically, are my three surviving guineafowl, who have become increasingly stand-offish since I arrived back from the west coast, and now spend their days pensively darting in and out of the savanna-like grass of the 30 acre windrows across the road, digging pits in the yard, and attending a book club that is currently reading through Joseph Conrad's Heart of Darkness. Okay, I made the last one up.

Second, there is lots of drama. Loads of it.

Most of it is related to their apparent misconception that it is my responsibility to provide them with food. In the case of Bella and the guineafowl, that is at least somewhat valid. Jasper and the chickens however, put up more fuss about it than they do. Just this morning for instance, Jasper came out on the deck as I was attempting to water my potted Artemus-absinthium and began meowing and pushing at my hands to the point that I couldn't hold the water jar straight. When I gave him a firm but slow nudge away, the cat, who jumps out of trees, vivisects rabbits larger than he is, and has been rumored to stalk herds of small deer, lurched sideways as if I'd punted him, fell down the stairs banging on every step and landed in a pitiful meowing heap on the ground. I can only imagine that such tactics must have been rewarded for him in the past.

Or take any time I walk to the other side of the driveway carrying anything that vaguely resembles a feed bucket. If you have never had the experience of witnessing eight chickens running at you full speed, it's quite terrifying. Like something out of Jurassic Park, really. Of course, I'm not carrying a feed bucket. The chickens are free range now, and expected to fend for themselves. Rather, what I'm carrying a basket for is to take their eggs with.

That has been another little adventure. While letting the chickens out means I don't really have to feed them, it also means they lay eggs wherever they feel like it. With 8/9 chickens to one person, I could almost theoretically maintain an unhealthy but livable diet off of just their eggs. But that means finding them. It's like Easter everyday. Only not. Not at all.

But seriously, I can't move, and have no privacy. The other day I was trying to do something covert. What was it? Oh, steal potatoes out of my grandparent's garden. I'm on this damned gluten free diet thing, and practically the only carbohydrate I can eat that doesn't have the word "ancient" or "expensive" in front of it is potatoes. So having neglected to purchase any, I did what any self respecting neighbor would, and snuck into the next door garden with a pitchfork and bucket. Everything went well. Until I saw something fly past me and realized it was the dog, who had followed me, and having no regard for my needed level of stealth, was bounding down to make our presence known. Save to say, I had no potatoes that night.

Or take this evening, when I tried to eat outside. I could write a book about how disconcerting it is to sit eating a bowl of tunafish with a demon possessed cat sitting four feet across from you staring you down and making unnatural, deep throated growling noises. But I will refrain.