After almost 2000 miles of what could all be described as the Midwest, we reached western Nebraska and things started to change, first slowly, and then faster and faster.

First everything got unbelievably vast. Then it got dry. Then it got rocky and the hills got bigger. And then it was basically the desert as we entered Wyoming. 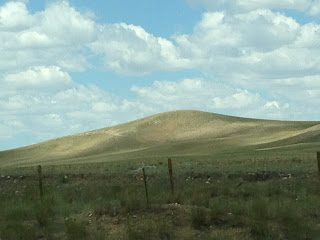 I think the biggest change is distances. Everything is so spread out.  It'd be boring if it wasn't so terrifying. 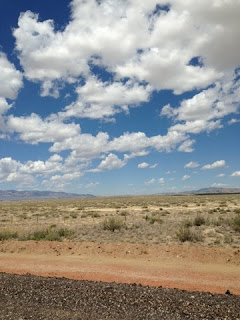 I had some time to think about it when we got stopped by a construction worker in the middle of a huge sandy valley for half an hour. I also had time to start that Louis L'Amour novel. 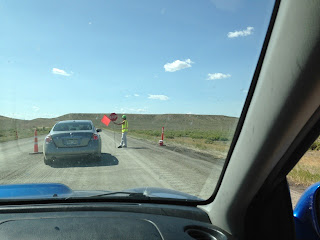 Ever since entering Wyoming we'd been climbing in elevation, and by the time we reached 6000 feet the land changed again. We were passing through Lander then, and what I think were the painted hills (though that may have only been the name of a development). It was beautiful. But things got even more breath-taking when we climbed higher into the Sheshone National Forest. After hundreds of miles of no trees, we were suddenly surrounded by them. 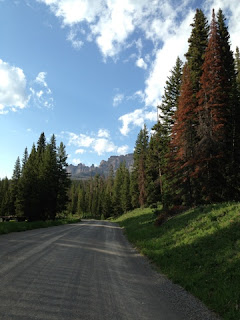 And then we saw them: the Grand Tetons. They reminded me a bit of the Dolomites in Austria, but with an even more majestic effect because they rise up out of what seems like a flat basin. 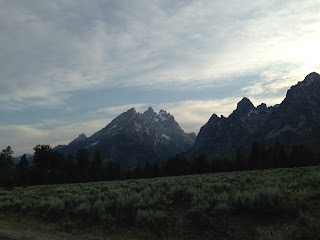 That's where we ended up staying the night. Actually it was about ten miles on back roads from there because all the campsites were filled up in the park. I'm being reminded for the second time this month I don't care all that much for camping. I think my body is too high-maintenance for it. But then it's an adventure.

So beautiful! Side note: you should read My Antonia if you haven't. Nebraska during pioneer days and just gorgeous writing.

I second the suggestion to read My Antonia. Lovely, frustrating novel.

Woahhh! Those pictures are amazing. We miss you here back home. :)