We've been in Navajo country for the last couple mornings. It's beautiful land, although kind of strange because everyone I see reminds me of some friends I used to have.

I've crossed two things of my bucket list - pretty much everything I wanted to see in the southwest. Though I definitely hope I'll be back before I die. It was cool enough to see again.

The first one was the Grand Canyon. We came down to the less frequented but still breath-taking north rim yesterday morning. It was amazing. 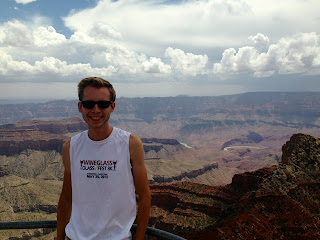 After driving under some amazing weather and passing through Four Corners, it was almost dark. Because it was the only thing around with camping, we went to Mesa Verde national park. And that was where I saw the second thing I'd always wanted to in the southwest: The cliff dwellings.

They were super-cool. Unfortunately I didn't get any photos of them with my phone, so those will have to wait. It was great to be there though. I can remember looking through this picture book of American Indians (it probably had words too, but they were irrelevant to me then) and spending hours looking at the page about the cliff dwellers. It was probably my favorite one. It seemed out of place in America somehow.

But this morning, there it was.

Climbing down into a Kiva made me think of the first Louis L'Amour novel I read. The Haunted Mesa.

There's undeniably something very spiritual feeling about this part of the world. I'm sure how it looks us part of it. But that could be said of much of North America. Here it's a little different. There's a human history to it. One you can see in those ruins. 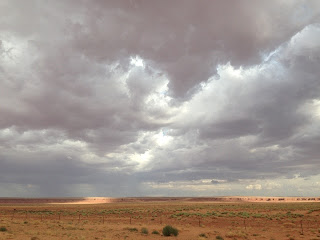 I thought about that as we drove through northern Arizona and New Mexico and southern Colorado. Past little Navajo trailers framed against massive Mesas. I also thought about both of my friends, and how, as far as I know they're buried somewhere out there in that expanse.