That big space between New York and LA 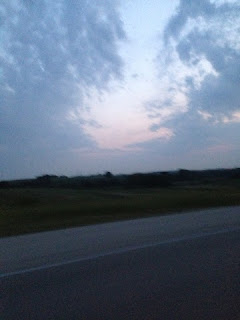 This morning around four we crossed into Nebraska. We'd been planning on going all the way to the line last night but when we realized that would mean stopping in Omaha we pulled off at the last rest area in Iowa and slept for a couple hours. Then a an hour ago we headed out for what will probably be another 1000 mile day.

The Land's different out here, but somehow not as different as I'd imagined. Really if you dropped me anywhere between Western Pennsylvania and Nebraska without any signs I don't think I'd be able to tell the difference.

It's interesting how interstate highways all look the same. I mean, obviously they're supposed to, but it gives the land that all looks so similar already quite a sense of continuity. In some ways it's comforting. In other ways it's disconcerting.
Posted by Andrew at 7/02/2013 06:52:00 AM