I think it's funny that when I said I was about to go on a road trip out west several people said something to the effect of: "That's awesome! Take lots of pictures so I can live vicariously through you." I think that's kind of funny, but just in case you were planning on living vicariously through me, stop.

Unless driving on the edge of the US-Canadian border past midnight at six mph for 20 miles over washboard dirt roads with the worst bladder/urinary tract infection of your life sounds like fun. Because that's what I was doing the night before last.

As I said the other day, everything out here is really spread out. Like, 200 or 300 miles spread out. Either my body doesn't like frequently going six hours without peeing, or something in my body that shouldn't be there does like it, because after our 1st 2000 miles, I suddenly found myself in a good deal of pain.

That reached its worst the night before last - which is also when we entered Glacier International Park after dark and somehow took a turn that put us in the middle of nowhere along the park's north-western edge.

We did finally end up in the park though, at the Bowman Lake campsite.

When daylight came I didn't feel much better, but the view of the lake was quite spectacular. 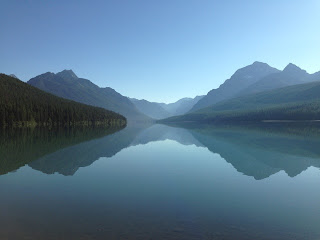 While on the shore we met this eccentric little old mountain man who spent an enormously long time telling us about his misadventures photographing grizzly bears.

Because it was Forth of July, we'd had trouble finding campsites all week but made it to the other side of the park and then back up the middle in time to get the last spot at one of the campgrounds up in the mountains.

While we were finishing the check in process, a ranger asked how long we were staying. When she heard only for the night, she suggested climbing up the Sunrift Gorge Trail as the best thing we could in that amount of time. Also as something "not many people do."

She was right. It was beautiful. Not too steep, but a little challenging when crossing some snow packs that are still across the trail. 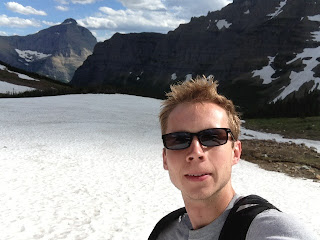 I really like Glacier because it's on the edge of several ecological zones and has some diversity of plants and scenery that I'd been missing so far on our trip. That was one of my favorite things about Lebanon and certain parts of Europe, and I'd started to think the US might just not have anything like it. Glacier came pretty close though. 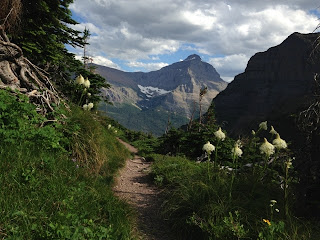 And I was also beautiful, in a breathtakingly massive way. 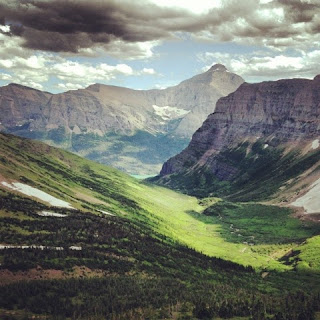