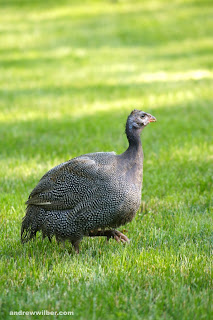 Friday, June 14 is a day that will no-doubt go down in infamy. Liberation Day.

Guinea Fowl Liberation Day, that is.

After two months of slave labor (by me), one death (by the guinea fowl), and calamitous prophecies from my younger siblings about what was going to happen when I finally released the birds, I  received the green light from my neighbor––who knows about such things––to go ahead and do it.

So this afternoon, most of my family excitedly standing by, I descended into the coop and spent a couple minutes trying to manually remove the birds. After deciding that that was not the manner in which I wanted to die, I opted for grabbing a pair of wire cutters and slashed a large hole into the side of their wall. And––nothing happened. We tried to scare them, and still nothing happened. So I left them alone for half an hour, and again, nothing happened.

Finally, I took their feeder-bucket and placed it outside of the coop. Almost immediately they all came out. Then I put it back in, and they all went back in.

After everything I'd heard from people about the difficulties of getting them to go back in their coop, I felt this was rather anticlimactic. But it was also a relief, and I went inside to eat supper in peace.

Half an hour after that, I heard a tremendous racket in the back yard and, fearing the worst from the dog, dashed around the house. What I saw was this: The entire flock of guinea fowl standing toe-to-toe in a formation that looked vaguely like the herd of herbivores in the Disney movie Dinosaur when they are warding off the T-Rex, craning their necks and screaming as they moved in a slow, coordinated circular pattern. The object of their wrath: My family's chickens.

The chickens––who were behind a fence, by the way––didn't seem the least bit perturbed by all this, and only stared at the belligerent African jungle birds in disinterested silence. And after half an hour or so, the guinea fowl lost interest as well, and turned to excitedly devouring grass out of our yard. And as far as I know, that is what they are still doing.

So the guinea fowl are free. And one thing is certain: The world will never be the same. 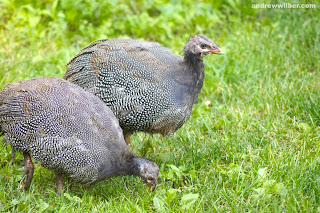 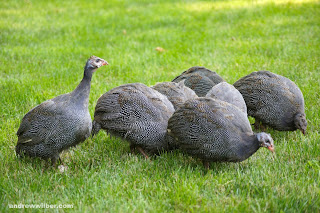 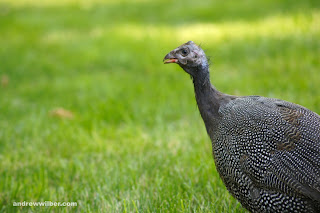 Thanks, glad you thought so :)