The Pig in the Park

A few miles east of my house, on the intersection of two roads––one paved and one not––is a little clearing with a single wooden picnic table and one of those charcoal grill things that sticks up out of the ground on a pole. This is the top of Coryland Hill, and the odd little clearing is called Coryland Park. I've always kind of liked it, if only because it has a kind of cozy feel and gives the area a sense of place that it would otherwise completely lack. In the 20 some years of my life that I have spent here though, I can't say I've ever actually seen someone picnicking at Coryland Park.

This could possibly have something to do with the fact that it's on a road with almost no through-traffic in a township where even the poorest residents own a few acres of forested land––land on which they could easily light their own fire and grill hotdogs without driving a mile to sit awkwardly beside an occasionally trafficked road. In fact, if our locality had any kind of a government worth commenting on, I might venture to say that Coryland Park was a genuine failure of civic planning. The word boondoggle, or "bridge to nowhere" might be applied. But our locality does not have a government worth commenting on, so I won't. And besides, as I said before, I rather like Coryland Park, if only for what it represents.

Just because it isn't used for picnicking doesn't mean that it isn't used though. No indeed, since I took to going for runs past it a few years ago I've noticed all kinds of interesting signs of, shall we say, recreational activity. In fact, coming up on it close to the three mile marker for my runs, speculating about what I may find there has become a kind of dry entertainment for me. Nothing however, has come close to what I came upon there last week as I rounded the bend.... 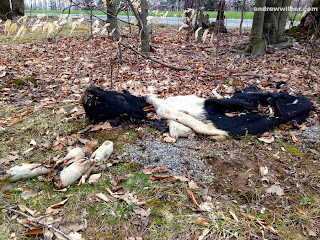 My first thought was an instinctual reflex: Skunk! But as I neared, I realized that this was larger than any skunk seen in North America at least since what paleontologists call the Pleistocene Epoch. My next thought, as I passed by it was Panda, which I realize is entirely irrational, but that's kind of what it looked like.

Positive identification required a closer inspection, upon which I determined that it was in fact a pig. A giant, black and white striped pig with all of its insides missing, its disconnected appendages piled neatly beside it, and an Adam Richman sized mouthful of dirt and leaves––to be specific. 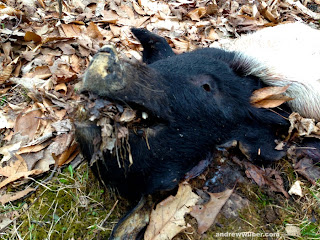 Once the initial gratification of having discovered something truly weird and disturbing that day in Coryland Park wore off––which it did almost immediately––my thoughts turned to how long it may be there before someone removes it. Judging by how long it once took a garbage bag of beer cans some environmentally and socially conscientious individual had discreetly stuffed in the barbecue to disappear, I would estimate it will be at least six months. And since running season is only just beginning, and the only long-run route I can take without fear of having my trachea ripped out by someone's adorable canine companion leads past Coryland Park, it looks like I'll be seeing a lot more of the pig for some time.

first thought- WEIRD
second- EWWWW
third- WHO???
fourth- WHY???
and does this apparently disturbed individual needs to be discovered?

I asked the same questions... and I don't have the answers to any of them.

Oh, gross! By insides missing, do you mean it was butchered in the park and the good hunks of meat were taken out, or was it eaten by other critters?

I'm also curious about what this pig is doing there. But still, gross.

It was butchered for sure. It was basically just the skin, the head and the legs were left, and it looked like it'd been done kind of neatly (as neatly as you can do something like that). I still have no idea why someone would do it there.