Thursday afternoon I'd just got back from a run and was about to swing my leg up onto the upper section of my parent's deck to stretch when I checked myself and almost fell backward in shock. There on the deck, where I'd been about to land my foot was a dead crow. And not just any dead crow. It was an elegantly and terrifyingly dead crow. On its back, talons extended in an eerie, frozen grasp, beak cocked slightly to the side, dead eyes staring piercingly into mid-distance, laying on a symmetrically curling slab of bark that looked vaguely like one of those three-leaf painting stands that they have in medieval churches. Basically, this crow looked like Boromir floating down the river in his funeral boat the last time you see him in The Fellowship of the Ring.

After stumbling backward and finding somewhere else to stretch my hamstrings out, I walked inside and said something to the effect of: "Why is there a dead bird on the deck?" At which point someone casually answered: "I think your sister put it there," as if it's the most normal and natural thing in the world. After finding said sister, I finally gathered that she had been on a walk in the 40 acre pine forest near our house and had found the bird, there, and that I shouldn't worry because it was frozen.

I might add at this point that the cat we belong to, Jasper, who has been known to eat entire rabbits, absolutely refused to touch this bird. So there it sat. And I was left to say several more times throughout the day: "So, when are we going to do something about this dead bird on the deck?" Because it was honestly legitimately unsettling me every time I saw it.

Finally, sometime shortly after supper, I complained again, and my Dad, who I think was feeling the same way, finally said something about burning it, after which I saw the crow no more.

We had just bought the movie The Hobbit, so that evening, we all sat down to watch it for the first time since we'd seen it in theaters.

Somewhere between Smaug laying waste to the Drwarven stronghold in the mountain and burning the city outside to the ground with his breath and the part where Rabadash the Brown revives the poisoned hedgehog, my Dad disappeared for a minute, and then reappeared at the door, calling for my brother to come help him with something. Sensing a level of urgency in his voice, I stepped outside and through the darkness saw an eerie red glow emanating from the forest next to our house.

Apparently, the effort to incinerate the scary looking dead crow had backfired––literally––and now the entire hillside below our driveway was engulfed in a slowly but surely spreading lake of flames.

This may have been the worst forest fire we've ever accidentally started, it was by no means the first. So after a moment of petrified shock attempting to separate the reality of what was happening from the reality of marauding dragons, a frenzied dash into the the woods with rakes, shovels and a spiderweb of hastily connected garden hoses ensued, and the fire was no more than a smoldering black spot along the hillside.

So all ended well.

But I knew there was something strange about that crow. 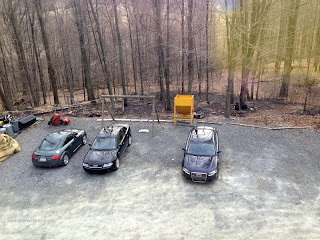 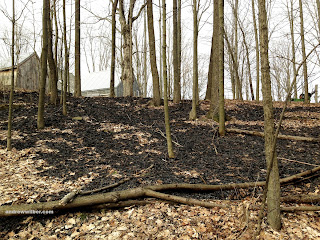 "The cat we belong to" :)
Crows are creepy to begin with (The Birds, anyone?) so that sounds pretty terrifying. Sorry about your woods. Also, I really enjoy your blog posts. Just throwing that out there.

Yes Andrea, the Cat adopted us. Not the other way around. And thank you! I'm glad you enjoy my blog :)

Mom: Or could that be "Blackbird" by the Beatles?