My sister Mattea––who I'd subtly been trying to convince to go to Italy for about three years now––is going to Italy to study at the same school I did four years ago. What's more, her friend Mikaela is going with her, which actually didn't surprise me that much. 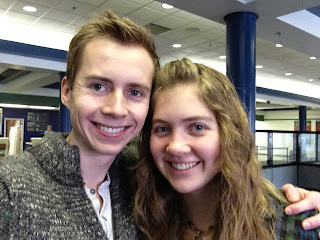 What did surprise me was hearing just a couple months ago that Mikaela's brother, my friend Josiah was also going to Europe at the same time, though not to Italy. I'm a little foggy on the details, but I know he'll be in Switzerland doing something with L'Abri in the Alps, which I think is pretty much phenomenal. 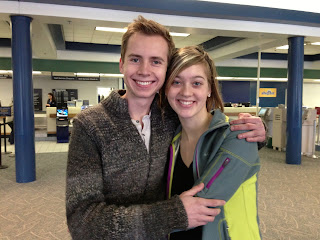 So this morning we piled into two cars and drove to the airport to say goodbye to all three of them.  There was about a 45 minute group hug session/camera-phone photo-shoot in the check-in area before we finally saw them to the security check point.

Then someone figured out that the airport diner had a glass wall that bordered the departure area, so everyone rushed in there and pressed themselves up against the glass waving at the three of them. 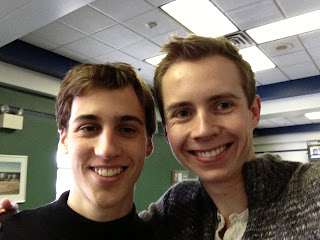 I know it was probably hard on my parents, but honestly it was probably one of the least sad goodbyes I've ever had just because I'm extremely happy for all three of them. And kind of wish I was going with them.

At any rate, I hope they have an awesome, life-changing three months over there.

They're probably somewhere over the Atlantic this evening, which in my experience is a good place to be––a long as you're headed in the right direction.
Posted by Andrew at 1/31/2013 08:08:00 PM