This time it was right

As you may have read in my second to last post, I started this blog seven hunting seasons ago to tell tales of adventures in the field and––hopefully––post photos when I bagged a deer.

Unfortunately, that was the first year in four that I didn't get a deer. And in the six years that have followed I have been either unlucky or out of the state during hunting season.

I woke up around 6:30 that morning and spent 45 minutes making my usual circle around my Dad's and Grandpa's land. I saw several groups of small doe, but never for long enough or close enough to take a shot.

By the time afternoon rolled around, I was feeling pretty tired.

No, that's an understatement. I was feeling downright depressed––for reasons that had absolutely nothing to do with hunting season. I had no intention of going out again that day, but when four-thirty came, I suddenly had the impulse to gear up and just go out in the field a quarter mile from my house anyways.

I walked out across the drilling pad and was about to cross the opening between the two earth embankments that separate it from the field on the side with the pine forest. Before I made it though, I glanced three doe standing a little over a hundred yards out in the corner of the field. There were some weeds in the way, so when I dropped to one knee, we could barely see each-other, and if they noticed me, they didn't seem to care.

I'm not sure how long I spent looking at them through my scope, but I doubt it was more than a couple minutes. They were all a pretty good size, but I couldn't decide if the one on the far right or left was bigger. At the last minute I switched to the one on the left. It looked a little better, and was also a slightly cleaner shot.

As always, when I finally pulled the trigger, it wasn't a calm, collected decision with a slow, smooth, deliberate pull like they teach you to have in a marksmanship class or basic training in the military. Rather, it was this uncontrollable nervous lurch. Some twitching, angry character in my subconscious who––just before you think you're ready screams: "Fire, damn it!" The same evolutionary left-over who pushes you when you're standing on the edge of the highest dive you've ever taken pondering how badly the water will hurt if you hit it wrong. The one that always leaves you feeling after you've done it saying: "I don't remember really intending to do that then."

This time though, it was right. I saw the deer jump and kick wildly in the air before taking off into the pines with the rest of herd. There was a band of left-over snow along the edge of the woods where the sun never really reaches so I walked all the way down that looking for blood where they inevitably had to cross. I saw nothing, which was disappointing. I decided to walk back on the inside of the woods' edge though. Still no blood anywhere, but all of a sudden I saw the deer, laying just inside the trees with its head pointing toward the field like it had tripped over itself when it went down. It was quite dead.

It weighed significantly more than I do––an impressive fact as long as you don't know what I weigh––so I had to have my brother help me drag it back to my house. I know it's only a doe, and not my first deer, so taking a photo with it is kind of ridiculous. Still, it's what I started this blog all those years ago to do. So here, is the obligatory photo: 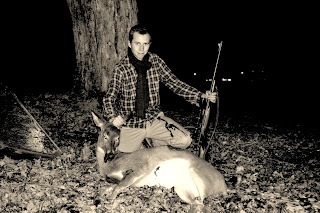 I like the story and the photo. I think it's cool that your face turned out nice and clear.

I went hunting with my father many times. The culture holds good American memories for me.