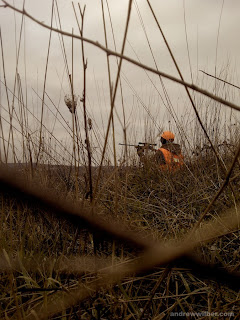 I didn't think I would be back in PA for another hunting season. But here I am. First one in a few years.

Things have changed a little bit since 2009. There was the whole natural gas boom/bust. Thanks to that there's now a giant drilling pad in the middle of the 20+ acre windrow field to the west of my house. Unexpectedly, this has actually been a really good thing, because it forces the deer to stay between its 15ft. earth walls and the pine forest––meaning that they get seen by me––not the trespassers who inevitably end up on Saxons Knob, across the road.

There are also more deer than there were in 2009. There aren't quite as many as when I was a kid, nor are they quite as big. Still, there are many more than there have been in the recent past. My brother and I have already had several fairly good opportunities to shoot, even if they haven't been prizes.

And there's the other thing that's changed. I had hunted with my brother one year before I went to Tennessee, but it's a lot different now. He has more experience, and I feel like we work as much more of a team. Oddly, I think some of this is because of how much we play video games together. It's pretty weird, but it's almost the same––only we aren't getting shot at.

So between my brother, the expanded deer population, and the new gas pad, I feel a lot more hopeful about this hunting season that I can ever remember feeling in the past.

I also feel like there's probably probably something problematic about using a drilling pad with tanks and a pipeline containing thousands of cubic meters of explosive pressurized natural gas as a backdrop/blind while you're shooting high-velocity rifles. That sounds bad, but somehow it doesn't seem at all scary when I'm actually doing it.
Posted by Andrew at 11/27/2012 10:49:00 PM No comments:

Today is the seventh anniversary of my blog. The actual date was November 29, but the spiritual anniversary is today, since today is the first day of Pennsylvania hunting season. It was this day seven years ago  that I wrote an email to a good friend detailing a misadventure early that morning in which I came the closest I ever have––consciously at least––to getting shot.

I had had a blogger account for a month or two to comment on other peoples' blogs, but had never thought of a topic to write my own post about. The next day though, I had the idea to adapt that email––which didn't take much work––to be my first blog post.

At the time, my blog was named Bradford County and I supposed that it would be about hunting and other things related to life in a rural area. The name has changed––several times––and my days of posting about hunting disasters and crazy neighbors were short-lived. One topic that has steadily endured though is misadventure.

I've always been enthralled by the idea of adventure. So it isn't that surprising that several years ago, I began to model my life––and by extension this blog––toward seeking adventure. In the end though, I feel like a great deal of what I've found––and an even greater deal of what I've written about––has actually been misadventure.

Whether it was getting shot at while hunting, hopping a train in Italy––to a city I wasn't trying to go to, running around naked in the snow in Latvia, getting stranded at an intersection in Beirut, having my camping plans in Wadi Araba interrupted by Bedouins, writing a newspaper article that made half my college hate me, driving 700 miles without a muffler or getting the very flesh cooked from my body on Nassau and then accidentally taking a girl to eat conch salad from a drug dealer under a bridge, just to recount a few, the last seven years have been full of it.

Even this summer, as I've supposedly been relaxing at my parents house and trying to "figure my life out" I somehow ended up entangled in a police brutality protest, hiking the steepest mountain in the Adirondacks with the worst hangover of my life, getting stuck on the wrong side of the Hudson by an unplanned Navy Parade, and inciting Google to briefly delete this blog––proving that even it is not immune to misadventures.

Of course not everything that I post is about adventures-taken-a-wrong-turn. My entire life hasn't been like that, so it wouldn't really be honest to portray it that way. I have found though, that of all my posts, the ones that strike the strongest chord with the most people (something I wasn't even interested in doing in the beginning) have been those that were somewhat discordant––but not too discordant. Basically adventures with just a bit of the "mis" prefix in them.

I've had many of my readers (that sounds so effing pretentious *makes slightly post-ironic face and says in overly enunciating accent somewhere between Oxford British and North-Eastern-American-metropolitan-liberal aka. NPR host: "My readers...."*) independently make the comment that after reading my blog, they didn't know "whether to laugh or cry." And I guess if I had a goal for how I wanted people to feel after reading, that would be it, because in the end I guess, that's how I feel about the world most of the time.

So it's been seven years full of misadventures. And until one of them kills either this blog or me, I look forward––if a little bit apprehensively––to writing about a lot more of them, and hopefully continuing to connect, possibly (emphasis on possibly) inspire and at least entertain along the way––and I say those last three things with much less apprehension than the first.

Thanks so much for reading!

10 things I ask myself while driving home after midnight

For a somewhat complicated and not entirely logical series of reasons, I have ended up living in rural Pennsylvania, while almost my entire social, political and religious life is in Upstate New York. This rather precarious and inefficient arrangement involves lots of commuting. Thus, it is not an uncommon thing for me to find myself two or three nights/wee-hours-of-morning a week driving  the treacherous, twisting route back from Corning or Horseheads, NY to my house in northern PA.

This evening was one of those nights, and aside from listening to music as usual, I also found my mind mulling over a series of deep questions that has slowly evolved over countless nights of driving. I thought it might be interesting to list them here. Perhaps someone out there has answers.

One of those weeks

It has been a frustrating, disappointing and generally demoralizing week.

Everything that I was afraid would happen in my post a few weeks ago happened with the exception of this blog being deleted (Google actually did delete it, but I sent them a complaint in which I laid out the same case I made in the afore-mentioned post for why it was ridiculous that they delete my blog, and the next morning they actually sent me an apology of sorts and un-deleted it).

While I suppose that may mean more to me in the distant future, it's a small reprieve compared to losing the YouTube channel––my only anything-like-consistent source of income––and knowing that all the hundreds of hours of work I did on my other channels over the last couple months was probably pointless.

And then there was the election. That was disappointing.

I just finished applying to work at a hospital––in public relations, that is. I figure as long as medicare is around, healthcare is one industry that will be growing. And medicare won't be going anywhere for the next four years.

I don't care much for hospitals, and I always swore I'd never work in one, but this job listing was literally the first job listing in my field of study that I have seen within 80 miles of my home since I started looking in May. So I figured I'd better apply.


This whole living 20 miles from everywhere with no car and almost no money was kind of relaxing for a few months, but it's starting to wear on me now.

Listen to me complain. I mean really, such first-world problems. Most people out there don't have cars, don't worry about not being able to find jobs "in their field of study" and have political leaders who are far worse than ours in many ways.