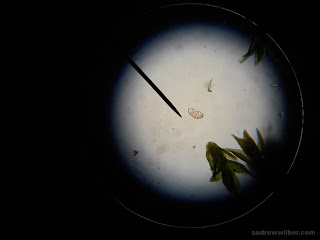 A few weeks ago, I watched a somewhat sensationalist but still interesting documentary about tardigrades––the tiny extremophile organisms that live on tree bark and have been proven to survive in space. I was fascinated enough by it that I ended up showing it to my Mom, who subsequently showed it to my sister Misha.

I didn't think much more about tardigrades until last night, when I got home from taking the FSOT in State College (went well I think, but won't know for three weeks now) and found Misha staring into a microscope––where she had apparently been for almost an hour.

That afternoon she had gone out in the yard with her pocket knife, found some moss, prepared a slide, and now, discovered a tardigrade, in our yard! 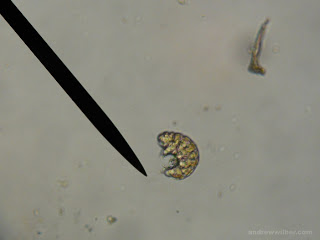 It was cool enough that I decided to try and take some photos of it, and after some trial and error, was impressed with how well a point and shoot camera was able to capture images from the microscope eyepiece.

It was mostly impressed with Misha though. This was the kind of thing I always dreamed about doing when I was her age but never actually did. It makes me wonder what she'll find next.

Of course I have no idea if she'll stay interested in science. But she certainly seems to be off to a good start!