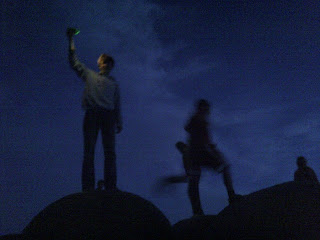 It's been a long time since my last post. Really quite an unacceptably long time.

It certainly isn't that I haven't done anything––although I haven't been terribly busy either. I think the main challenge was that the things I did kept me away from home, making it less likely that I'd blog. At the same time, those things have been of the kind that are difficult to concisely describe in a blog post.

Last weekend, for instance, was really fun. I spent it with my family at a friend's house where I had a marvelous time running around on hay-bales, sleeping on the grass under the falling stars during a meteor shower––the Perseids I think, and playing music in a drum circle for several thousand NASCAR fans who were stuck in traffic on the road next to their house, which runs right by the Watkins Glen Racetrack.

So it was a great time, but also a sprawling time that I'm far too lazy to write about in a way that would attempt to capture its essence in any compelling sense. 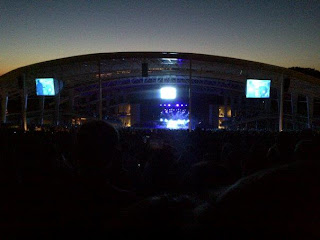 A few days before that, I went to a Mumford & Sons concert in Canandaigue, which was a phenomenal experience as well. We were in cheap seats; or rather non-seats as it was more of a field. But I ended up being glad we were where we were, because we could see the shooting stars falling behind––as it were––the stage. There are lots of shooting stars in August. Of course sometimes they were hard to see through the cloud of cannabis smoke that was hovering over the entire audience, but I'm sure that only made it better for some people. Mumford & Sons were phenomenal––even without pot, which, as one of the few people on the hillside who was not smoking, I can say with honesty.

This afternoon I just returned from Maryland. I was helping a friend who was helping his girlfriend move to New York, and so I spent a day and night in a suburb of Baltimore. It was the first time I can remember being in Maryland for any reason other than driving through it. And usually driving through it at the narrowest point, which takes about 15 minutes. 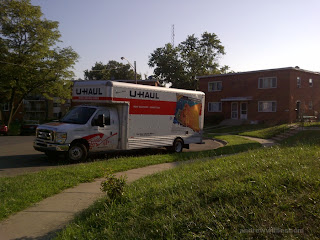 Packing the van was quite an experience––as the furniture was solid oak and all on the second floor. But I think that experience was matched in intensity by the adventure of getting the van out of the city. I had only limited experience driving in cities. That changed. Driving behind in a car, I think I intentionally cut off about a thousand people on a dozen occasions to let the van merge in front of me.

It was all fun though. After last weekend I felt like I wasn't ready to be home just yet. It may be a little adventure in the sketchier satellites of a major metropolis was all I needed. Spending the night there was fun too. You couldn't see the stars though. Maybe they'd all fallen by then.
Posted by Andrew at 8/16/2012 10:24:00 PM