In a Blue Moon 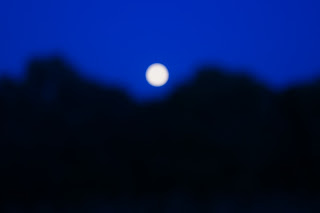 Tonight is a blue moon.

Two nights ago as I was out running––because I was in a dark mood and that's what I do when I'm in a dark mood; but that's beside the point––I reached the spot where I usually turn around back to the west and noticed that the sun was setting. Looking down at my shoes and the gravel as I ran I saw they were all bathed in this fantastic light that alternated somewhere between orange and crimson and rose. Realizing the only thing more beautiful than the sunset itself must be the hills behind me in that light, I turned back to the east, still running––(I wouldn't particularly recommend or endorse running backwards––by the way). While the landscape was breathtaking, I was even more impressed by the  moon rising as the sun was setting, and thought how big and beautiful it looked. Then I ran seven more miles trying to forget whatever was bothering me, and also forgot about the moon.

I had completely forgotten what I had known the first of this month. That is, that August this year would have two full moons, and didn't think of it again until this evening after supper when my Mom mentioned it. Only an hour later, it appeared.

There was a huge bonfire in our yard for some reason, so to snap some photos away from the light, I walked out into the field just above our garden. I took a number of shots with the f-number tuned way up and the shutter speed slowed down that were sharp and clear, and showed the craters or 'mares' on the surface and everything that a good moon-picture is supposed to show. But I was really unimpressed with them. They'll never be as good as others that you could just google. So instead I chose this one that is as far out of focus and blurry as it could possibly be. If you just look at it fast I think it gives you a better feeling of what it really was like.
Posted by Andrew at 8/31/2012 10:41:00 PM