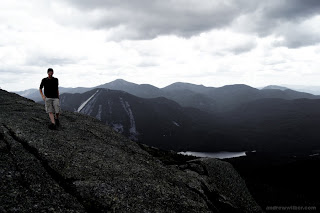 A friend of mine, Alex, is really into climbing mountains––particularly in the Adirondack Range. When I got back from Tennessee this summer he invited me to go with him on his next trip, but because of one thing ore another, it kept getting put off.

This Saturday it looked like it was finally going to happen though, and we made the five or six hour drive north to Adirondack Loj––the intentionally misspelled hiking base a few miles from Lake Placid.

As Lake Placid is one of my parents (and I guess mine too) favorite vacation spots, I had been in the area many times and even hiked one of the easier climbs that branches out from Loj. Never anything super intense though. 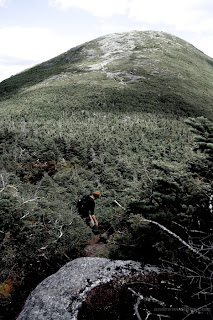 Saturday was different, as we had tentative plans two summit two mountains; Algonquin and Iroquois.

The hike up Algonquin was pretty challenging. While I was expecting it to be long and pretty steep, the smooth rock faces that that have just low enough a gradient for you to walk on them without falling backwards were tiring.

We also got off to a late start (about 3:45am instead of 3) and were moving pretty fast to make up for it and have time for both summits.

Safe to say, by the time we got to the top, I was pretty exhausted. The view was beautiful though, and after eating lunch at the top, we decided we could make it to Iroquois too. 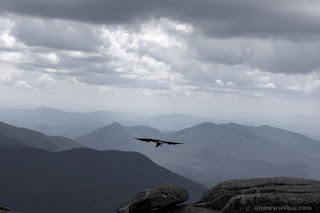 Iroquois didn't turn out to be nearly as far as I was afraid it would be. While it had taken us almost three hours to get from Loj to the summit of Algonquin, Iroquois was essentially on the same ridge, and only took about half an hour to reach.

The climb down went––obviously––faster than the assent, and all said and done, we finished the entire climb an hour ahead of schedule, which was nice, considering that we had almost a six hour drive back.

It was a long day, but it was also fun. And the scenery was as breathtaking as usual in the Adirondacks. Just as we finished the final slog up the side of Algonquin and collapsed on the summit, I saw this bird [above]. It was flying like you would see it fly high on a thermal in the air above a parking lot or river or something––only we were on level with it now. I was honestly too out of it right at that moment to appreciate it very much, but the photo looks cool.
Posted by Andrew at 7/23/2012 07:26:00 PM

So great! Makes me want to go back as soon as I can-especially with you!