I've been blogging for seven years now. A couple years back I decided to limit posts to things that I felt would be interesting to people besides myself. I know that's a very subjective criterion, but it was more than I had before. This caused my number of posts to drop dramatically––as there often just weren't that many things I felt would be interesting in my life. Tonight my problem is different though. There are too many interesting things that have happened since my last post. A photo-shoot with Tommy Hilfiger's sister, narrowly escaping getting gang-raped by serial RV'ers in Weedsport NY, Kayaking in Keuka Lake and nearly hijacking the Keuka Maid. All of these could be interesting stories in their own right. So I'm left having to resort to story-telling-triage by picking only the event that I feel is most compelling and best documented. The winner is: attending a protest against police brutality and judicial corruption centering around the arrest and incarceration of Robert Leone.

Robert is a man from Vestal NY who was arrested near Towanda PA in 2010, after not pulling over for a state trooper (the ensuing "car chase" reached the speed of about 45 miles per hour). When Robert finally was run off the road, the by this time five troopers in pursuit commenced to tase him, stomp on him, and do a number of other things that while not visible in the squad-car dashboard video were sufficient to leave him looking like he does in the prison mugshot below––and that was after he had been to the hospital.

There are numerous conspiracy theories and accusations surrounding the case ranging from the police beating him in the hospital to all out corruption within the Bradford County judicial system denying him parol until it was too late to file charges against the state police.

I tend to be fairly skeptical toward things like this, and would assume that at least half of what is said is untrue. In this case though, if even 10% of it is true––and I think at least 10% of it is verifiably true––I think it's worth being upset about. That said, I've always wanted to participate in some kind of a public demonstration. I have a hard time finding groups that I agree with enough to feel okay about it though. So when my friend Frank posted on facebook the night before asking if anyone wanted to come with him, I said I was in. Even though it meant getting up at five in the morning. 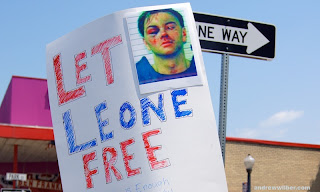 We arrived in Towanda a little before seven. There were only about nine people there, but we started anyways, even though it seemed a little awkward.

Slowly more and more people trickled in, and things got more intense.

As one would expect, while about 80% of the protestors were people who followed the case and were outraged about it specifically, the event was a draw for anyone and everyone with some grievance against the Bradford County judicial or criminal justice systems––which is to say there were some interesting characters.

Everything stayed peaceful and orderly though, and by eleven thirty, there were closer to a hundred people. That was when the media showed up in force. 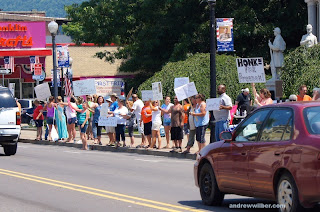 There had been a reporter there from the Towanda Daily Review for most of the morning, but by noon, every TV news station for 80 miles (which is to say, two or three) had a crew there.


When they showed up, things took on an entirely different flavor.

While most people seemed enthused by their appearance––and showed it in their protesting––I was a little unsure about being on local news at any kind of political demonstration. So I swapped my sign out for my DSLR and took photos––something there were a lot of photographers doing at the point, making it easy to blend in.


While this may have been a less-than-daring thing to do, it did give me a chance to get a lot of shots and footage of the event, so rather than pushing this post any further beyond the length acceptable for a readable blog, I will simply let the rest stand as a sort of photo essay of the experience. I also compiled some of the video I shot into a short, minimally edited video, that you can view here if you're interested. 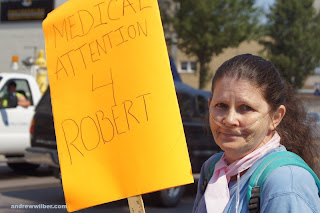 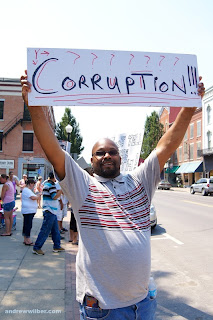 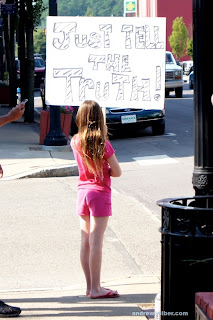