Blond Is the New Bad 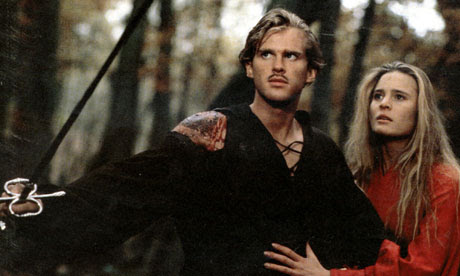 Whatever happened to the time when the good guys were tall skinny people with blond hair and blue eyes? I remember it being that way once. It was back when I was a little kid––a very little kid––and movies like The Princess Bride, The Man from Snowy River and practically every Disney movie ever made featured tall, skinny, blond-haired protagonists.

Tall skinny people with blond hair and blue eyes were the heros. Always. A stereotype you say? Yes I'll admit it––and I'll put it one step further: it was an archetype.

But by the time I was old enough to really appreciate the fact that I am one of those people, the tradition, which can be traced back at least as far as Chariots of Fire and Lawrence of Arabia , had been completely abandoned. The blue-eyed blonds now played supporting roles as a new school of thought said that they were too "innocent" looking and replaced them with a darker, more worldly-wise, more built hero. Brunett was the new blond and girls all wanted "the tall dark one." If you look today, I think you'll be hard-pressed to find a movie with a blond protagonist.

What goes around comes around I guess, and, even if I was born too late and missed the generational boat, it wouldn't really be fair of me to begrudge the brown-haired brown-eyed people who make up 90% of the worlds population their time in the spotlight.

What disturbs me though, is a new trend. It's come in just last couple years, and it's one that does more than ignore the old archetype. It completely reverses it. Enter tall skinny blue-eyed blond as villan.

and Snow White and the Huntsman:

And there are others. These are just the two that I've seen in the last week.

What disturbs me more than the fact that tall skinny blue-eyed blonds are now uniformly cast as antagonists is that they have also become the go-to people for any role that is cold, hard-to-read and emotionless. That's because I've been described by many different people as all of those things.

You'll have to excuse me. I need to go have an identity crisis.

And the dark reality is that throughout history we gingers have always been under appreciated...at least you had your chance to shine lol.

First of all, I just read your Profile blurb under your picture for the first time. Nicely done, Andrew. I like it very much and may have to imitate.

Secondly, Mrs. Coulter from The Golden Compass also fits perfectly into that archetype.

I'm reminded of what someone said once when we were talking about how utterly disturbing it is when children play evil creatures in horror films. Children are supposed to be innocent, pure, and free. When that is twisted and darkened, it becomes very, very dark. The blond, blue-eyed ones seemed even more extreme.

At least you've still got even the modern renditions of Thor and Captain America on your side. And Taylor Swift. :)

= used to wish I was blonde in high school because the blonde girls always got the most attention. Now I realize the attention was on more than just their blonde hair, but still, until recently I've always wanted my hair lighter.

hey, even the bad dude in the Percy Jackson series is tall and blond (might be gray eyes though).
^stephen there will soon be a pixar film with a wild red headed girl as the main character and you have the legendary pippy longstocking as well. Though I can't think of any guys with major roles, you're right about that.

Haha, didn't think about that Stephen. A guess you guys are the perennial victims of hair stereotypes.

Thanks Lindsay. And yeah, I agree there is something disturbing about something that's normally perceived as being innocent or good being evil. On a side note, my freshmen year of college, I once dyed my hair black in the middle of the semester. I've never been one to get a ton of attention (at least of a certain kind) from girls, but I actually did a lot more with black hair, which I always thought was interesting.

Yeah Isaac. And the White Witch in the new Chronicles of Narnia.

This is great - and so so true. You didn't mention Shasta though!

Yes, I was going to mention the White Witch. I remember being put off when I saw the movie.

I've also been called hard-to-read and emotionless, which stings. But it does come in handy sometimes, especially when dealing with dangerous people.