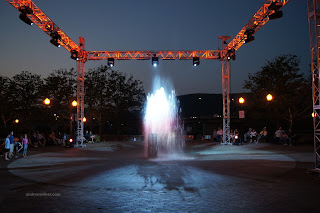 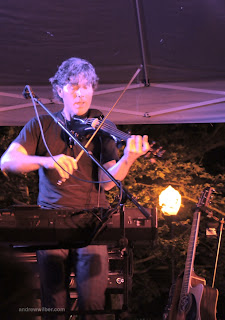 It's always interesting when you go somewhere that you've been many times and find it presented in a way that's completely new. Last night I got that feeling at Corning's riverside Centennial Park.

It was the 3rd annual Glass Fest (Corning's main claim to fame is glass––think CorningWare) and it was really the most happening I have ever seen the town with the possible exception of Sparkle, but I haven't been to that in probably ten years, and the main thing I really remember from it is roasted chestnuts.

Things kicked off with a beer and wine tasting around Market Street (the definition of beer and wine was a bit wide... I'm not sure that Lima Rita counts as either). Then came the event everyone––at least everyone I knew––was waiting for: the Virgil Cain concert.

I'd never heard him before, but he was really good. Kind of a 21st century take on the one-man-band. He did mostly covers, but I hear he has some original stuff as well. 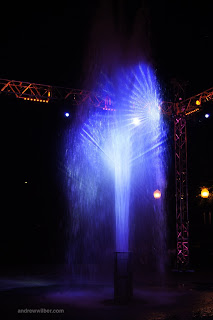 In between sets, the fountain at Centennial was turned into a light show. I'm not sure if I liked the music they chose for it, but the fountain itself was spectacular. Back to what I said about seeing some place you thought you knew transformed into something different and possibly better.

After it was all over I went to MSBC with a few people. Ended up on the roof at a table with the coworkers of one of my friends. They are all with the gas industry. These guys work at more of the engineering and finance levels though, and the conversation switched to the price of gas, the health of the industry, and the economy in general. Apparently things don't look very good. From what they said, it will be at least 5 - 10 years before natural gas prices get back to what they were before this year's slump. And that's the number that for better or worse, most of my material life seems to hang on right now.