Here's to a good thing 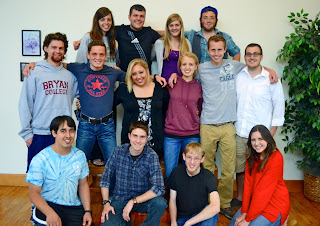 Over the years, especially the last four or five, I've worked and lived with many different groups. They've included all kinds of people, been based in a lot of different places and existed for a lot of very different reasons. While I can feel nostalgic about many of them, there really aren't a ton that I can say I miss that much. In fact, only two come to my mind right now. One of those is the staff of Triangle this past year.

While graduation two days ago marked the end of two and a half years at Bryan (three if you count SBI), it was really only the last year that I found a group that I really felt like I had a place in. That was while working for Triangle, the campus newspaper.

When I started––purely because Kaity, one of my friends from SBI asked me to––I was really, really intimidated by the idea of publishing my ideas for a large group of people to potentially read (other than on this blog, that is). And while it turns out it was challenging and I was probably right to be intimidated, it also quickly became one of the things that I most enjoyed doing. I think a large part of that is because of the people who made it what it was. They eventually became some of the people that I felt most at ease around and enjoyed the most.

I remember a few weeks ago going to Chattanooga with Alex and Cat (both from the staff). I think I've mentioned before that I usually felt like whenever I went somewhere with a group of people, it was always automatically a strange, random group of people just because I was there. I think that night going to Chatty was one of the first times that I didn't feel like that.

Whether it was staying up all night to get meet a deadline, working on some crazy video or project that had never been attempted before or just sitting around wondering if it was possible for the majority of the student body / faculty / office of student life / admissions office / [insert entity of your choice] to get any more furious at us, there was some kind of bonding that occurred that I usually struggle to achieve with people. And it was fun.

It's way, way too soon to know if I will miss Bryan, miss Tennessee, or even miss college in general. But I can definitely say to my comrades from Triangle: I will miss you guys.