The Conch Shacks of Nassau 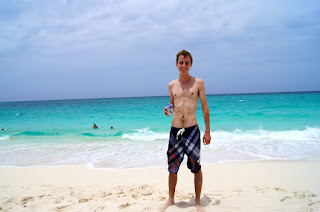 I've come to the conclusion that cruises aren't really my thing.

This feeling was amplified by the fact that it rained the first couple days.

Things got better when we finally landed at Nassau though, and looking back, I kind of wish we could have just flown there or taken a speed boat or something like that instead of having the main attraction be the journey there itself. 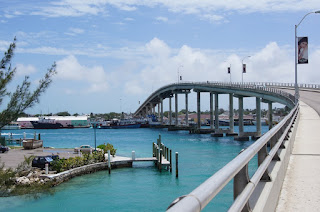 After the previous two days, I was determined to avoid the other cruisers as much as possible. So as soon as I got off the boat, I set out into some back streets away from the main shopping area that goes along the harbor. It was cloudy when I got off––as it had been for the entire cruise up to then––so when the sun came out suddenly, I decided I should go back and get some sunscreen and glasses. On the way back, I ran into Shannon and Rachel from our group heading to a beach on the other island across the harbor. After inquiring if they had any sunscreen, I decided to go with them as going to the beach was also one of my goals for the trip (the sunscreen they had turned out to be expired, leading to my present circumstances, looking like a nuclear firestorm survivor, but that's another story unto itself). 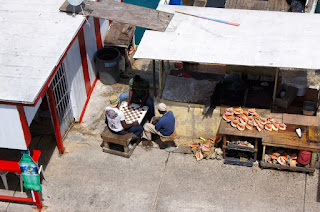 Due to it's being on another island, getting to and from the beach required walking across one of two large bridges that connect the more developed Paradise Island with Nassau––where all of the actual residents live. While coming back across the bridge, I looked over the pedestrian rail and noticed several small fishing boats tied up behind a row of shacks that were built on the edge of the water directly under the bridge. They were full of what appeared to be conch shells, of the kind I liked to collect when I was little. Closer inspection, however, revealed that they were in fact entire conch animals. Then I noticed that many of the shacks had "conch" in the titles on their signs and advertised dishes like "conch salad." After Shannon remarked that the place––which except for the conchs and a few Bahamians playing checkers was relatively deserted that afternoon––looked like it would be a much more happening place at night, I decided I had to come back. 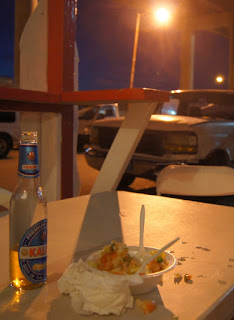 And that I did. Around 7:30, I got back off the cruise ship, went through customs again, and made the two or three mile walk back to the bridges.

There were no tourists around, but the area seemed at least relatively busy with Bahamians sitting out in front of the line of conch shacks.

While walking out under the bridge, this guy started waving to me from one of the shacks and called out "Hey, tall guy, you want  [held hand in front of nose and made sniffing gesture] some white stuff?" I smiled and said "Not tonight, but thanks" and kept walking until another guy stopped me and asked if I wanted to smoke (I can usually tell from the intonation in someone's voice on the word smoke whether they're talking about something other than tobacco, and the intonation was definitely there).

After refusing the second offer, I continued walking to almost the last shack in the line, at which point I could no longer resist my curiosity to find out what "conch salad" is.

It turned out to be delicious. Think pico de gallo––only spicier and with lots of chunks of sweet white meat in it that I presume was the conch.

The rest of the trip was unremarkable, and, thanks to the radiation burn that I got earlier that day and a lingering cold that came back with vengeance, rather unpleasant. If nothing else though, I can add conch salad at a shack under a bridge in Nassau harbor to my list of memorable culinary experiences.
Posted by Andrew at 5/04/2012 01:43:00 PM