What a great weekend.

GPG was absolutely fantastic, the group that I went with was a blast, DC was as cool as usual, and I even got to meet up with a friend from my SBI days; Stephanie, who I hadn't seen in about two years.

The conference was amazing. The thought of even recounting a little bit of it is exhausting. On top of that, we were asked not to tweet, blog or otherwise share online about specific parts of the conference due to the dangerous political and criminal situations that much of the organization's international staff work in. So, if you're interesting in learning about what happened, the safest and easiest thing I can do its just refer you here.

For the same security concerns, I wasn't allowed to take any photos of the event itself, and about the second day, I hadn't used my camera once, and was regretting that I had packed it. Then one of  the people in my group––and that person shall remain nameless for numerous reasons––had the uncontrollable urge to climb to the top of a tower crane next to our hotel.

He told me he was planning on it, so I lent him my camera, a sweater (it was the middle of the night) and had him write my number on his arm in the real possibility that he got arrested (a precaution I learned from some of my Occupy friends). 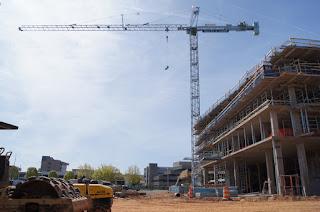 And here is a picture from the top: 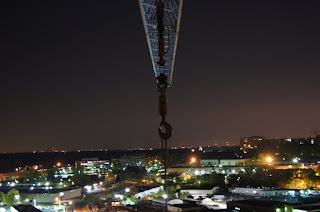 The only shots I took myself were a couple on the Mall minutes before Steph met me there. After that it was just catching up on everything (or a lot of it) that's happened to us in the last couple years, which is quite a bit. A lot of adventures. And I can't talk about much of it either.... also mostly because of security concerns.... 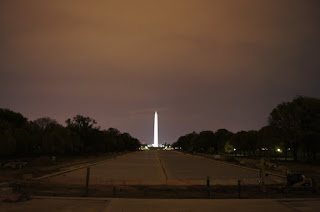 I've always wanted to do something along the lines of climbing a cell tower, but the absence of any near me (and the risk of tarnishing my sparkly record) is enough deterrent. :)