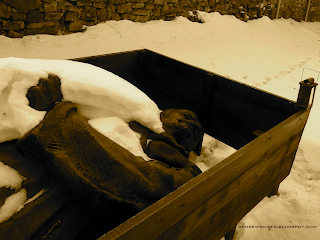 I just finished Bram Stoker's 1897 thriller Dracula. Was quite a good read.


While I had always heard that the book (probably on Focus On the Family or something) was evil and a metaphor about sex, the introduction by Brooke Allen said that while most people in the 20th and 21st centuries look at it that way, it probably wasn't. If anything, aside from some Eastern European mysticism and a probable overemphasis of Satan's power, I think the book had an overwhelmingly Christian take on the world. At any rate, it was interesting. I especially enjoyed how atmospheric Stoker's writing is when it comes to describing places. Between that and reading most of the footnotes, I almost feel like I've been to 19th century England/Czechoslovakia.

So now that I have a solid historical foundation in vampire literature, perhaps my next book should be in the realm of contemporary undead lore. Twilight anyone?


Note: the, the photo above is not actually Dracula, rather a statue of Joseph Stalin at a Castle in Latvia. I took it while I was traveling in Cesǐs on my day off about a year ago.