I start to worry when things seem like they're going well. It means at some point they have to stop going well, at which time I'll almost wish that they hadn't been going well in the first place.

I know I'm not the only one who feels like this, because it once got brought up in the guy's Bible study I used to have during summers off with Patrick and Josh back home. We'd talk for hours about just about anything but the Bible (eventually we'd get to that) and when somebody brought up the subject of good fortune or success or what-have-you, we all agreed that we felt the same way about it––grateful, but very uneasy.

That's kind of how I feel now.

The last couple weeks have been some of the best in at least a couple years. School has been relatively easy. I've been able to do a lot of things I enjoy. People have appreciated things that I've done and told me they will miss me when I'm gone. And the reason I'll be gone is because I'm finally going to be done with school... this thing that I have only recently started to enjoy at all.

About a month ago I submitted one of the films I shot for my internship over the summer to a regional college film festival in Chattanooga; the Broad Street Film Festival. Thursday night this past week was the screening, and it was weird, one, to see something I had spent so much effort on and watched so many times played on a huge screen, and two, to get so many compliments and positive remarks about it. I mean, I felt like it was pretty good (or else I wouldn't have submitted it), but I really wasn't prepared for what happened.

Last night was the awards ceremony at the Tivoli Theater (pictured below in this photo I stole from the Facebook page) and I won Best Documentary. I was kind of expecting that actually, as out of the 19 films that were entered, mine was the only one that really qualified as complete non-fiction. What I didn't expect was also getting nominated for best editing––which I didn't win in, but it was still a surprise, especially considering how awesome the two films it was up against in that category were. 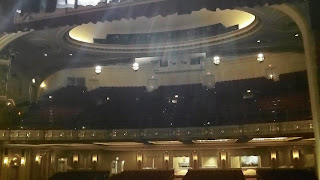 Then came the after-party, which was fun. Soooooooooooooooooo much dubstep. I haven't danced that hard in years, but it was good to blow off some steam after the evening––which included finding out half an hour before the show started that I would have to give an acceptance speech. It's a rare situation in which two hours of jerking myself around to the pulsating grind that is for-better-or-worse is the music of my generation will actually calm my nerves, but it did last night. 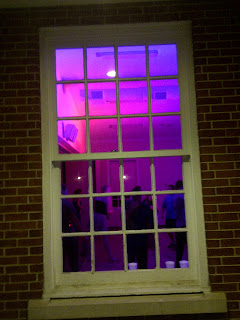 So that was that. Won an award in a film festival. Who'd a' thunk? 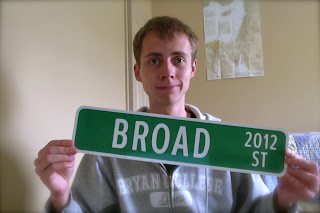 And it's all far from over. I have just a few assignments to wrap up this week, and then it's off to the Bahamian islands for what may be either a week of well earned relaxation, or mayhem and misadventure, depending on how the spirit leads. Then it's back up here for the graduation ceremony and all that goes along with that.

So, it's times like this that I start to get uneasy that something is about to go terribly wrong. Maybe that's just to help me keep it in perspective. Everything we do is really so insignificant in the grand scheme of things.
Posted by Andrew at 4/22/2012 12:52:00 PM

Yayyy!! I'm not surprised that you won, but it's still fantastically exciting!!!

Your Mom shared the exciting news with us this morning. Yay!! How does one watch this award-winning film?

I have to show it to you... it can't be put online unfortunately. If you were in church the week I gave my presentation after I got back from Lebanon this summer, then you actually saw part of it.

Congrats!!! Can't wait to see you and your documentary!