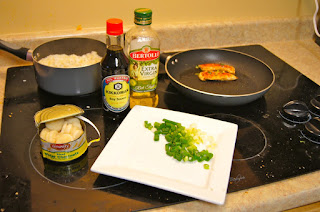 Since moving to the townhouses, that is, the apartments here on campus that are separate from the dorms, I've been off the meal plan. This is nice, because I save some money, (last semester almost $600, counting what I spent on food) although it does mean having to come up with other ways of getting food. So rather than taking it as an opportunity to live off of McDonald's  for six months as some people I know, I decided it would be a good time to cook for myself.

While I do end up eating quite a bit of stuff like eggs, sandwiches, and mac and cheese, I've also tried to make some more interesting things at least several times a week. This evening I decided to do stir-fry. 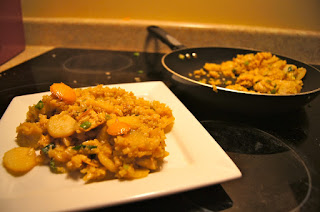 I had done this several times last semester, but usually just with whatever I happened to have lying around + rice. This time I tried to get some things you would more normally expect in stir-fry like water-chestnuts and soy-sauce and such. I think you are usually supposed to use peanut-oil instead of olive oil, but I don't really know what else I would use peanut oil for, so I wasn't about to by a large container of it. I think olive oil is healthier too, and I always have that around, so I stuck with it.

Way better than a cheeseburger :o)

That looks really good. I want a stove so bad!

It is handy, I'll tell you that.

Awesome! Once you start doing it more often you will get more creative. It looks great though! Rice, soy sauce, and "stuff" is a good way to go - it looks like it came out awesome! :)