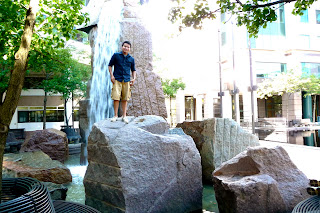 This is a picture of my friend Chris.

I've only ever had a few close friends, but Chris was one of them.

We were very different in some ways, but maybe that's why. He had a really hard life. Probably the worst life of anyone I've ever known. But he was also the most optimistic (to the point that it bothered me) and generally happy person I've ever known.

One thing we did have in common was music, and that was our main connecting point from the time he first moved to New York where we met. We were both learning to play guitar at the time, and while he quickly surpassed me, he was always my favorite person to jam with. We liked some of the same bands, and he introduced me to more and probably shaped my musical tastes more than any other one person.

I heard in some class or other that for men, your friends are individuals that you do things with. And while fate and geography kept us separated for the vast majority of our time, whenever we were in the same part of the country, Chris was somebody that I did things with, whether it was playing guitar and talking about music late at night on the balcony of his first apartment, sneaking into bars when we were underage, or driving all night to see a band and explore a city we had never been in before.

If you know me, you might be thinking some of that sounds out of character, and maybe it is, because Chris was the only guy I ever did that kind of thing with. I'm not entirely sure why that is, but I think part of it was how much he enjoyed life... even when it didn't go as planned. Things that would have ruined my day normally just felt like part of the adventure when I was with him––something that would make a story we would laugh about months or years later.

And there are a good number or those stories. I'll always be glad to remember them. Sadly, though, there won't be any more, because Chris died on Thursday. And I don't know what to do.

I will miss you my friend.

Omg, my smile reading your touching blog quickly flipped. I am so sorry to hear about your friend, Chris. As cliche, cheesy, and possibly unwanted as it may sound, you have some fantastic memories with him and I am envious of you for that. Be strong, he will be with you in spirit - especially when you play that "one song" on the guitar you guys always enjoyed jamming to, or listen to that "song" on the radio that makes you think of one of those road trips. My heart goes out to you and although I don't know you I am confident you will get through this ok .... Chris would want it.

Thanks, I really appreciate that.

That is so touching Andrew! I'm am so sorry and i really miss him as well! You made me cry!

Thanks Brooke. And I'm sorry I made you cry.

I am so sorry Andrew-