It's been raining amazingly hard all day and all of last night. In fact, it started yesterday afternoon as I was driving back from Tallahassee.

I had spent Thanksgiving break in Florida with my cousins––just like last year––and it was a good time. Between running in the Tallahassee Turkey Trot (my 3rd time doing that... the first was long before last year), going to sporting events, and eating an obscene amount of food, I somehow had some downtime and was able to relax. 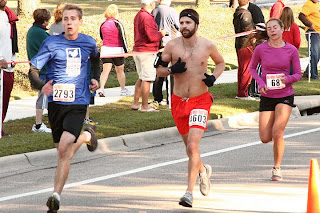 The race went well. I got a 21.13, which is my fastest for the event, and also for any 5k in general. So that was cool, although I still think the most enjoyable part of it may be going to east Krispy Kremes afterword, which is part of the tradition.We took our annual photo in front of the Krispy Kreme sign, but I don't have it yet, so that will have to wait. Here is one from the race though.

I once again went Black Friday shopping with my cousins, and once again, hardly bought anything. This year though we didn't go out nearly as early (8am as opposed to 4) which was really fine with me.

It was weird saying goodbye to everyone. It's not like I won't see them again or anything––I just probably won't be back for another Thanksgiving anytime soon. You never know though. It was a great and unexpected opportunity to be able to spend the last couple with them, and who knows what will happen in the next year.

The drive back, as I said was rainy, and also quite long due to ridiculous traffic south of Chattanooga. I somehow picked up a couple Bryan students in Tallahassee for the ride back though, so it was at least more interesting than doing it by myself.

Drafting my research paper for intro to teaching English as a second language and finishing the video story about National Gaming Day that had started last Saturday pretty well consumed the last three days of the week. There was also preparing for the last official class meeting of Senior Seminar, which meant having my portfolio––something supposedly supposed to represent the last 3 and 1/2 years of my life finished, dressing up, and having a mock interview at 8am Friday morning.

Saturday I woke up early-ish again and ran in the 5k for Kenya run that SIFE holds as an annual fundraiser for Gethsemane International to help AIDS orphans or something like that. I learned this year that it's technically only 2.9 miles, not quite a 5k, but the hills and the fact that it's largely off-road make up for it. I finished in 22.13, which is better than I did last year if I recall.

I unfortunately had a class/brunch that I was supposed to be at in Dayton at the same time as the race was happening, so after stopping for a few minutes at the finish line, I just kept on running the half mile or so to the house where the event was. It was the final meeting for the Chicago Story Conference group, which was more interesting than most of my classes, and I also ended up eating a much more substantial breakfast than I otherwise would have, which was probably good after the run.

I spent the rest of yesterday chilling out and today haven't done much but go shopping quickly this morning and then doing a take-home exam for Law of Criminal Justice, which was much more straightforward than the first one and I finished in just a little over an hour.

I'm starting to feel like I'm really over the hill with this semester. There's still some work to be done for sure, but several of my classes are over already, and of those that aren't, the projects that I was kind of dreading all semester (dreading is probably too strong a word––more like 'not looking forward to) are mostly finished.


So much has happened this semester. I think it's the first one during which time kind of got away from me. The beginning doesn't seem like it was that long ago, but if I think of everything that's gone on, it starts to seem like it was.
Posted by Andrew at 11/20/2011 01:05:00 PM No comments:

I was rather down last week for some reason. Also came down with a bit of a cold of some sort that's been going around campus. Have generally been keeping up with assignments a little better than I was during the first half of the semester though. I guess those woe-is-me times can sometimes help me focus, or at least feel guilty enough about vaguely defined but terrible shortcomings that I perceive in my life to not want to add to them by squandering my education and money by not actually doing "productive" things. This weekend I finished up production on the latest video for Triangle, and started filming interviews for another. The one that just got posted, is––if not the most profound––easily the most entertaining of the year to date. Most of this is thanks to Alex Green, and his amazingness. But then, I did spend about 8 hours getting it to look the way that it does in post, so I guess I can take a little credit for it. Enjoy:

It's been a long time since I was actually inspired enough by something that I learned in school to post about it. I think Cognitive Dissonance, a term coined by Leon Festinger, which is the idea of conflict existing in your mind between either ideas, or an idea and your current lifestyle is worthy of mention though.

If you know that not sleeping is bad for you, but you make the choice to not sleep, that is cognitive dissonance. That's just one example. You can apply it to almost any subject.

Some people can apparently tolerate rather high levels of cognitive dissonance while others can tolerate less. I like to think that I can tolerate very little of it, but that may be inaccurate.

Here is some from my own mind. I kind of agree with both of these articles:

In Praise of Capitalist Inequality

This is an issue––or rather set of issues––is one I've been struggling with for a while. I've even interviewed people from both sides of the issue about it. But I can't decide.