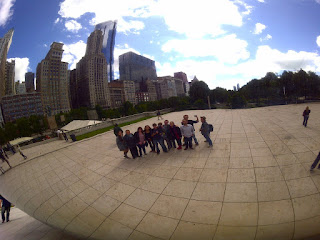 Chicago has been good so far. We started out last night at a sort of adult story-hour/potluck/open mic, which was in a bar and ended up being a little on the far out side (okay, more than a little, but I will spare you the details). This morning we headed into the city from the house we rented and attended the conference, which was great. I got to see, among other people, John Mark McMillan, Ted Dekker, and Sean Astin, who wasn't even on the program, but turned out to be one of the highlights for me. It's also like the Mecca of hipsters, which I guess I'm okay with. 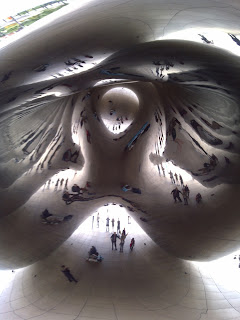 Over lunch break we went into the city center, and after a somewhat stressful experience parking, were able to walk around whatever the park area that is there, which was beautiful.

Left is the "Bean" or something like that, which was fun. The photo at top is actually our groups reflection in it.

Below is the auditorium in which the conference takes place. John Mark and his warm up band, All The Bright Lights have been doing most of the music, along with some other group that is a little strange but still interesting. There has been lots of cool free stuff too, which is always fun.

This evening we went to a show at a theater that is owned by someone who spoke at the somewhat questionable story-hour from the first night. It was  excellent. So today was good, if tiring, and hopefully tomorrow will be good as well. 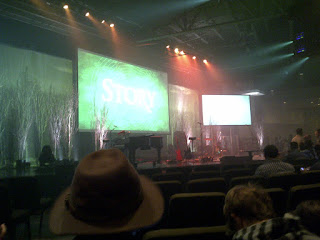 Oh... and that article, along with the accompanying editorial came out today in Triangle's first print edition of the semester. Apparently it is causing quite a stir on campus. I started getting the blow=back from it on my black-berry this afternoon. Interestingly, I was standing in the lobby right in front of Ted Dekker, who was talking about the importance of writing accurately about darkness, even if it's controversial. So even if my piece was only about clowns, it seemed strangely reassuring at the moment. If you're interesting in reading it, here is the link to Triangle, although, it is somewhat graphic in the quotations... so consider yourself warned.
Posted by Andrew at 9/16/2011 01:29:00 AM

Hey Drew! The conference sounds fantastic! Wish I was there too. If you see Ted D. again tell him I say "hi!" and that In the Blink of an Eye is my favorite. As for your Triangle article-Wonderful!!!! Keep up the great reporting.