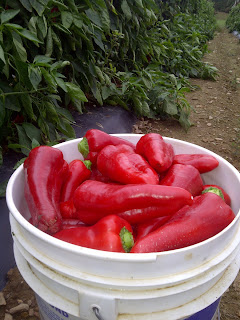 I can't remember if I mentioned before, but I started working at a farm on the weekends. At any rate, I worked there yesterday evening, this morning, and the better part of the afternoon.

It's relatively hard work, but it's kind of relaxing in a paradoxical  sort of way. I used to hate doing stuff like it, but after spending ten hours a day for the last three years either in front of the computer or reading, it's kind of nice to go and do something with your hands.

Last night we were harvesting peppers, and today spinach. The spinach takes forever, and I can't imagine that there are enough people who eat spinach to consume all that we harvested....

Aside from being relaxing, it also pays more than any other jobs around here would, which is a plus. The only drawback is it's about 30 miles away, which means that somewhere between 10 and 20 percent of what I earn goes into gas.

I'm done with that for the weekend now though, and amazingly, the one paper that I had to work on got postponed, meaning the only thing I need to do is finish a video I'm working on for Triangle about the Genesis Symposium the school is holding in Chattanooga. I got the interviews for it done on Thursday though, so the rest of it will be mainly editing.

Manual labor is quite refreshing after all this thinking we have to do. I go to work study and ask for a monotonous job so I can clear my head. Funny how that goes.