The rest of the story conference, that is, since my last post, went really well. The last day included all kinds of fabulous food from deep dish pizza to urban mix to fruit to Costa Rican food.

We also had the chance to explore some of the city, which was fun. Left is a photo of Chicago showing train tracks leading past the Salvation Army Headquarters and toward the downtown area.

Ian Cron spoke on the last day of the conference, and he was easily my favorite speaker. He read a bit from his personal memoir, and it reminded me a lot of Roald Dahl, one of my favorite authors.

On the morning of the last day before departing for Tennessee, we went out on Navy Pier––a beautiful place.

The ride home was interesting. We created a mix CD to which everyone contributed two songs. I introduced everyone to Miike Snow, and then, to LCD Soundsystem, which was much better received than I had expected it would be. 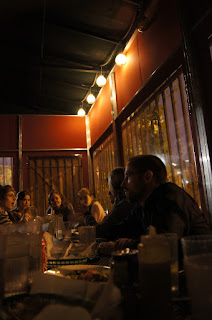 On getting back, I was greeted with the controversy surrounding my latest article.... People are fantastic liars. As an adherent to reformed theology, I believed this before, but it has now been confirmed yet again by my experience.

The people that I interviewed for the story are now claiming that they didn't know that I intended to directly quote them. I told them it was an interview for Triangle, the campus newspaper. What the hell did they think I was going to do? Transliterate their remarks into an interpretive water ballet?

And of the three people who refused interviews but confirmed their involvement, one or two wrote my editor in chief that I had told them that I would not publish their names. I did nothing of the sort. And yet they say that I did.

I had a pretty good conversation with one of them today, and it turns out this person was more upset with the accompanying editorial than with my story itself. As for the others, I can only say that their response has actually made me glad that I published their names.

I bought miile snow on iTunes, they are great!

Yeah, I love it! I ended up getting their whole album.

that article was not what I was expecting, but WOW. That is...something.

Yes, that was exactly what I thought when I heard about what happened. It's really a ridiculous story, but coupled with an editorial that someone else wrote, plus the fact that people around here tend to be a bit too concerned about appearances (at least in my opinion) and the fact that we had just published something else that was even more controversial, it created quite a stir.