Yes, in the below picture I am sitting with two Bedouins in Wadi Araba holding a gazelle's head. How I got into this situation is a rather long story, however. 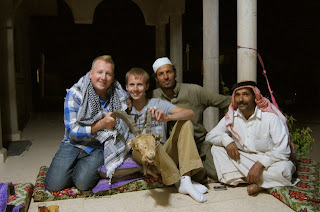 Yesterday, two friends and I decided to take a trip out into the Jordanian desert––in the car pictured below: 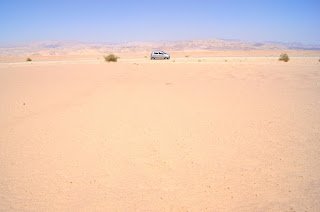 After visiting Mt. Nebo, the place where––according to tradition––Moses looked out on the promised land he would not be permitted to enter, we drove down to the dead sea, something I had always wanted to see. Since we were planning on camping out in the desert that night, and it is almost mandatory that you take a shower afterwards, we decided not to go swimming. So that will have to be for another trip. After that we headed south along the sea and made the 200-some kilometer journey to Aqaba. Along the way we made two stops; several to pick of hitchhikers, and one to run out and frolic in the sand... and discover that our Honda Compact was not the greatest off-road vehicle: 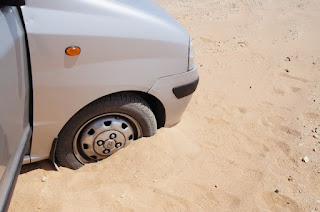 Another was to walk with wild camels: 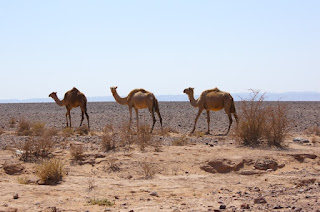 When we finally reached Aqaba, I had the strange sensation that I had seen the place before... and then I realized that I had––in Lawrence of Arabia

. We then went down to the beach and rented a paddle-boat. The Gulf of Aqaba isn't exactly the kind of place I ever pictured myself using a paddle-boat, but it was fun in a hilarious kind of way. It was also a cool experience because from the Gulf of Aqaba it's possible to see four countries at the same time: Jordan to the North-East, Israel to the North-West, Saudi Arabia to the South-East, and Egypt to the South-West. 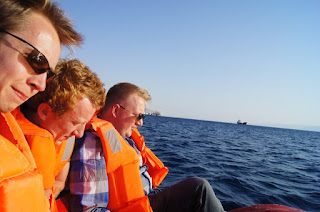 By the time we finished it was getting dark and we headed back out into the desert. After traveling into Wadi Araba we left the highway and drove along dirt (or sand, rather) roads until we found an abandoned hut-kind-of building with no roof and a walled in courtyard in back. The stars were just coming out when the first Bedouins came. 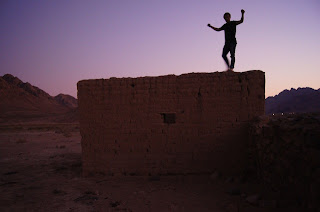 They spoke with Brett for about fifteen minutes and kept repeating that it was very strange for us to be there and that they had never seen anything like it before. They finally left and we went back to taking care of the fire. Just a few minutes later though, another one showed up, talking on his cell phone. He was followed by two more, and they were all adamant that it was not safe for us to stay there, telling us we would probably get shot or robbed or something along those lines. So it was evident that at this point the entire valley knew we were there––and wasn't particularly pleased about it. The also added that if any of these things happened it would reflect badly on them, since it was their territory. Thus, they insisted that it was their duty to take us to their home. We in turn insisted that we would leave and return to Aqaba and camp on the beach instead. They however, would not hear of this, and twenty minutes later we were following their white Toyota pickup back to their house.

So I spent the evening drinking large amounts of tea, sitting on cushions, and listening to Brett converse with them in Arabic for several hours. It was a surreal experience, and I'm tempted to write another post just about it. 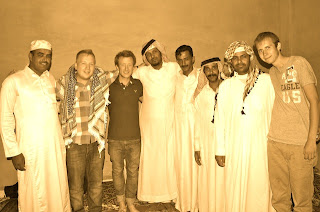 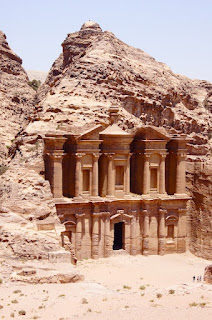 They woke us up at six-thirty that morning with more tea, and flat-bread, which gave us more than enough time to get to Petra where I had arranged to meet my friends and professor from Bryan for the day.

Petra is something I had dreamed of seeing since I was nine or ten, and so coming to Jordan it was the main thing I was looking forward to seeing. In the end though, and even though it exceeded my expectations thoroughly, it seemed more like icing on the cake.

Late that afternoon, I parted ways with Brett and Jonny and took the bus back to Amman. I had some work to do there, and also wanted to spend some time catching up with my friends. I was still a little sad to see the previous two days come to an end, as they were definitely some of the craziest and best ever.
Posted by Andrew at 7/05/2011 03:41:00 AM

you went to Petra!?!?!? awesome! did it look like the moody science video? lol!

I think those Bedouins just thought you were cool and wanted to hang out with you.

What an awesome adventure!!

Would you please come to my house and drink large amounts of tea with me? TOO COOL!!!!! and glad I didn't know about it until it was over (like the night in the Austrian train station incident)

I - for one - am glad you did not choose to stay in the desert and get robbed OR shot (forget that it would reflect badly on the Bedouins!!)

Wow! I am so glad you are getting to experience this incredible adventure! I'm guessing you are getting a bit more fervent in your Arabic studies? (Knowing that you are being warned for your life is kinda something you wouldn't want to miss interpreting! Praise God your friend was there!)

Andrew! I went to Jordan for the Acts Project this past summer and I met Brett! I just found your blog via Lindsay's and was reading this and I saw his picture and was like "I know him!" So cool! Was he with you in Lebanon at the time? When I went he was working in Jordan.

He was in Jordan. I only visited there for about a week while I was working on some stuff, but I ended up staying at his house and then driving around the country with him. So it was really only a few days, but he's a really cool guy. It's awesome that you met him in Jordan! How was your time there? I really liked it, but it could just be that it was so different after Lebanon.