I arrived in Amman Jordan yesterday afternoon after a quick flight from Beirut, took a bus, took a taxi, walked a few blocks, and made it to the flat where I'm staying. It's in a really fun part of town, so even though I was more or less on my own the first night, I definitely haven't been bored. 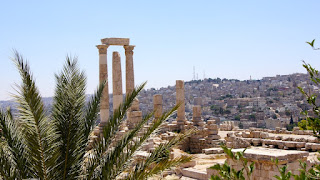 I got up around 8:30 this morning and went down to this little plaza overlooking the city where there had been guys playing flamenco guitar music and smoking argyle the night before and saw a placard indicating the significance of different buildings that could be seen from that place. One in the distance was labeled as "Umayyad Palace." Having no pressing obligations, I decided to walk there. While it was probably only half a mile away as the crow flies, it was on another hill, which meant I had to cross the expanse in between. Complicating matters further is the fact that few of the roads here go in a straight line. So all said and done, it turned out to be more like a two mile hike, and that was with a good bit of shortcuts through private property and up near-cliff faces... on the way I ran into this little guy, who insisted on me taking photos of him posing.... 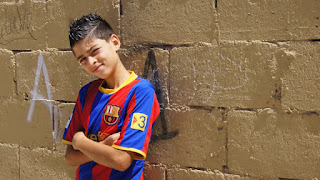 It was well worth the trek though, as the place that I ended up is basically the historical and archaeological center of Amman Known as "The Citadel," it has ruins dating back to the bronze age and coming up through Bible times, Greek rule, Roman Rule, Byzantine Rule, Umayyad Rule... etc. I ended up getting a private walking tour of the place for about 45 minutes by a guide who was there... I got a sunburn, but it was worth it I think. Interestingly, Amman was once called Philadelphia. Below is stone head that I saw in the museum––I can't quite place it, but I'm almost sure I've seen her in a book before. 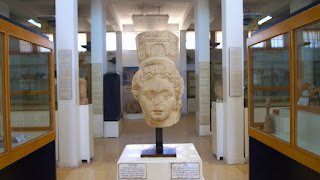 This afternoon I met up with two friends from school. It was really weird––surreal almost to see them here in Amman after not seeing anyone that I've known previously in over a month. But there they were, walking toward me on the sidewalk. We definitely had some serious stories to exchange over pizza from the past month and a half since we left Bryan for the summer.
Posted by Andrew at 6/28/2011 04:19:00 PM

I must say, Jordanian kids know how to pose....
Never knew that Amman was Philadelphia-the same Philadelphia in the bible?

not sure... I always thought it was in Turkey or Greece... but maybe there was more than one.

Smoking argyle with a pipe?

that is very possible.