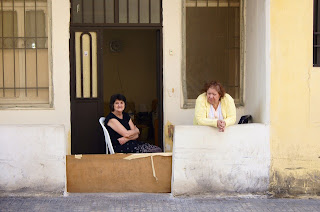 I spent a lot of time in the Borj Hammoud neighborhood this week wandering and taking photos. I've found that people are starting to recognize me there now––which is kind of cool and kind of intimidating at the same time. One women even remembered me from when I was there with a friend almost two weeks ago, just after I arrived in the country. She told me I should come to her shop if I came back. Just after I ran into her I passed these two women sitting in front of a house. I thought the colors were rather striking and asked if I could take a picture of them, while the colors turned out better than I expected, what really makes it, I think, is the expression of the woman on the right.

That day I also stumbled upon this vehicle, which I have since dubbed "the Jesus-Mobile." Borj Hammoud is populated mainly by Armenians, who are, culturally at least, very Christian––and they wear their religion with a swagger. Cross tattoos on muscular arms, images of Mary above the cigarette counter, rosaries hanging from mirrors, and of course, the Jesus-Mobile. 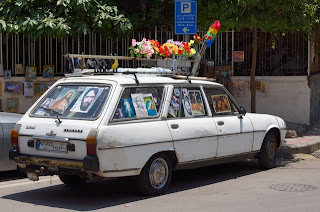 This next day I found myself not too far from Borj Hammoud photographing/playing soccer with a group of Turkmen children. The Turkmens, from what I gather, are kind of like gypsies with a semi-refugee status who migrate around the Levant working and begging. These little guys spoke about zero English, and I still speak about zero Arabic, but somehow it didn't matter too much once we started playing. It was a blast. 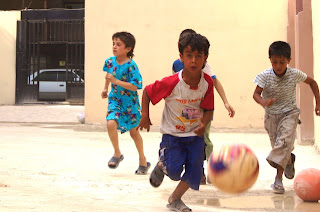 That picture of the two women could be on something in the news! and the kids are pretty darn cute.

This is a fantastic post Andrew! Great photos-and the one of the women....its priceless. Playing soccer with cute Turkmen kids must be fun. :)