Aside from getting over a cold, the last few days have been amazing. While I'd spent some time this week walking around Beirut, today was my first chance to get out of the city and see some other parts of the country. We ended up going to Beit Eddine, which is a castle/palace about an hour south of the capital. On the way there I was amazed by the scenery in the valleys, which were full of banana plantations. Up a few hundred feet it looked like you would expect a Middle-Eastern country, with olive trees and bare rocks. Up a few hundred more and it started to look more like Colorado with evergreen trees and much cooler temperatures. 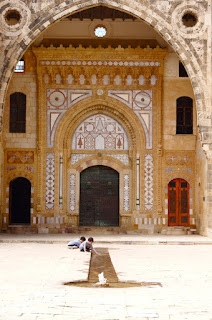 It would have been worth going just for the scenery on the trip there, but Beit Eddine, when we got there, almost made me forget about it. It was easily one of the most beautiful buildings I've ever been in... if it can really be called a single "building" - it had multiple courtyards and wings other architectural elements that I have know idea what to call.

After spending most of the early afternoon walking through the castle and taking tons of photos (of the palace, and some Lebanese kids who wanted me to take pictures of them) we headed north by a different route. Along the way we stopped at a restaurant where I had my first ever falafel. I wasn't quite sure what I was getting myself into when I first saw it, but it was actually quite good. 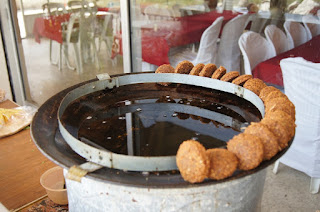 Our next stop was a national park sort of thing where I got to see Lebanon's national symbol: the Lebanese Cedar. Apparently the cedars in the south are "only" 400 - 500 years old, and thus not as imposing as those in the north. They were still beautiful though. Mark explained that long ago much of the country had been covered with trees like this, and it becomes easy to see why the Bible so often refers to the natural beauty of Lebanon. 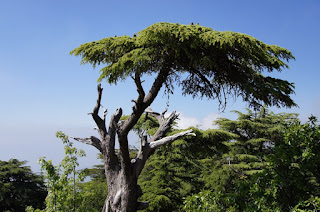 I love the picture of the kids playing in the water...though just as a reminder, keep National Geographic in mind when you take any picture, because maybe you could get one into the "My Shot" page, since they usually choose photographs from foreign countries. :)

Wow. I can't believe you're actually over there and experiencing it all! Does it seem unreal sometimes, or are you used to it, being such a world traveler now? :P

I don't know if I'd say I'm "getting used to it" but I definitely do have the 'unreal' feeling less often.

Yeah-that photo of the children and that beautiful building is amazing! And I love the Cedars of Lebanon-I think its crazy that you're so close to countries that are in one of my favorite books, The Hittite Warrior. That falafel looks...interesting...

You know that's one of my favorite books too Maryah! I read it a long time ago, and then when I was back at the house a little while ago (I think over Christmas break) I saw it out and read it again!

I may even be going to Sidon or Tyre this weekend.

That is so cool! I wonder if Tyre is still big with the "purple dye" thing.

I think it got destroyed by Alexander the Great soon after the book the Hittite Warrior happened, but there is still a fishing town there.