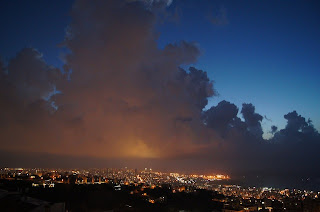 It's been delightfully cool and breezy the last few days. Sunday we went to a forest (the Lebanese definition of forest is quite liberal) a few minutes out of town and went for a hike. It was quite hot and I got my first sunburn since I've been here. That night though it cooled off and has been nice since. We even had rain last night, which looked quite dramatic over the city.

In other news, it appears that a new government has been formed after being without one since February or March if I remember. It collapsed last time because Hezbollah withdrew forcing a shutdown when things didn't go their way, and now the new government is composed even more so of them and their allies. The government hasn't been given the vote of confidence yet, but it will be interesting to see what the response from the West is if that happens.

According to one local news website there was some rioting yesterday with some major highways being blocked, but I didn't see anything like that (although I did think I noticed more security forces than normal while I was out walking the corniche yesterday afternoon.)

While on the corniche I met an interesting (and somewhat inebriated) man sitting on the railing overlooking Pigeon Rock. I ended up talking with him for almost an hour before he tried to get me to pay someone $50 to take a photo of the sea rocks from under a nearby restaurant, at which point I made an excuse to leave. I walked all the way back to downtown, which is a good hike. It was beautiful weather for it though, and I saw some rather interesting things, like people deep sea fishing, and workers accidentally spilling a bag of sand from the 15th story of a high-rise under construction.
Posted by Andrew at 6/14/2011 09:40:00 AM

I like to read your blog during breaks in the pit. It helps to break the monotony of spending three hours reliving two weeks during WWII. The photos are really good, too.

The pit? Reliving WWII sounds interesting... if a bit traumatic.