The Cedars of the North 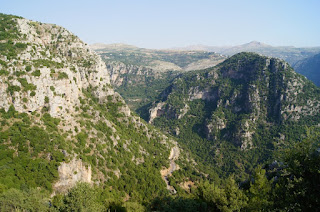 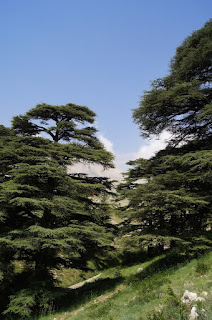 While I had gone to see the cedars in the South about three weeks ago, a number of people told me that the cedars in the North were much more impressive. Yesterday I got the chance to see them, and they did not disappoint. What I enjoyed just as much as the cedars, some of which were 1200 years old and bigger than any tree I've seen in real life, was the drive up.

The northern cedars are in the mountains more than two hours of winding roads and switch-backs out of Beirut. By the time we arrived there we had risen several thousand feet in elevation, and you could actually see snow on some of the higher peaks. It was also extremely cool and clear, which was a wonderful departure from the hot smoggyness of Beirut and the coastal areas.

The mountains on the way up reminded me very much of the mountains in the Greek Isles, which is interesting. I know nothing about the geology of the area, but it wouldn't surprise me if they were once part of the same land mass. They are just a few hundred miles away, after all. 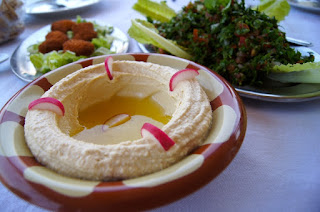 On the way up we stopped at a restaurant along the side of the road and had a delicious Lebanese meal with hommos, tabbouleh, fattoush, flat bread, and fries (oddly enough). I honestly think I may miss the food here more than anything else. I suppose there is always the Mediterranean section at Wegmans, but I'm not sure it will cut it for me anymore.
Posted by Andrew at 6/25/2011 04:49:00 AM

That pic of the hills, amazing! though I couldn't help but notice that it is not anywhere near as lush as the adirondacks, or even here, so I'm guessing that's the only real "jungle" the Lebanese have eh?

That area was closer to a desert than a jungle. There are areas along the coast in the south where they have banana plantations that are much more warm and humid, but I wouldn't really call them a jungle.

but no really. thanks for sharing your adventures so we can kinda travel vicariously with you!! =)