This weekend I did many things that I had always wanted to do, and several that I had never wanted to. I swam in the Mediterranean Sea, visited the city of Sidon, got lost in Sidon, stayed with a friend in Tyre, road around the ruins of a Roman Hippodrome (the same one where the chariot race in Ben Herr was filmed) on the back of a moped––without a helmet, laid eyes on Occupied Palestine, or The Zionist Entity, or Israel, depending on your political views from a distance, played Texas Hold 'Em with a group of Druze, had my foot partially run over by a taxi, and did a number of other things that my insurance company must never find out about. 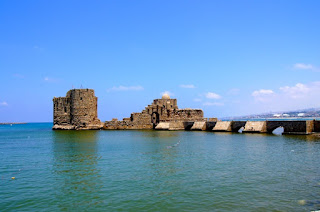 Above is what I believe is a crusader castle in Sidon or Saida. I was rather rushed there trying to make a connection and got rather disoriented in the Souk or market that reminded me a bit of Venice without the water, and thus didn't have time to take many shots. Things got better when I finally made it to Tyre or Sour, as the locals call it. I promptly went to the beach and spent most of the next day getting a tour of the city from the back of a moped driven by my new friend, Jonny. 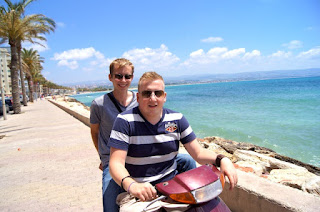 Tyre is full of Roman ruins––the most I've seen since I was in... well... Rome. Parts of a number of major movies have been filmed here, and I thought these below were particularly beautiful. If you look at the hill just visible on the horizon directly to the right of the palm tree in the center, you are looking at the Holy Land. That's how close we were to the border. 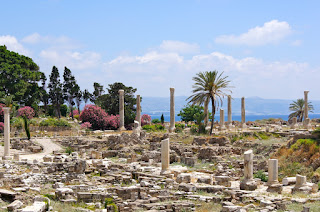 That evening on the Corniche we met this elderly woman and her grandson. I had a very long one-sided conversation with her. One-sided because it was entirely in Arabic... not really my strong suite. Jonny had borrowed my camera just before and was kind enough to capture the moment. 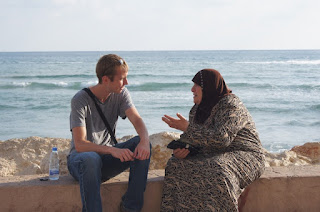 You mean you where moped-ing too?! And watch out for the yellow ones, they don't stop...though your foot already knows that. Love the new name and picture(s).
Sounds so amazing.

That is just too cool!!

You look so great! What a phenomenal weekend for you! :)