The Sound of Rainbows 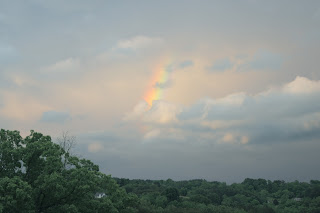 Yesterday it rained almost all day, but sometime after dinner the clouds broke for just a minute off to the west. I thought the sky looked kind of cool, and still getting used to the new camera, I decided to go out and take some pictures of it. Stepping out the back of my dorm to the east though, I suddenly say a huge rainbow. It was so tall that most of the arc was unfortunately hidden by clouds and only the bases of its legs were visible at all. Still, it was great to be in the right place at the right time like that.

I finished two papers for the intro to lit late last night, marking the end of that class, and I spent a good bit of today running around trying to sell the text book. After checking with the kiosk that buys them back on campus, I decided to sell it back to Amazon instead, as they'd give me about ten dollars more in the form of a gift card, which I will hopefully get in time to put toward some extra batteries for the camera. I would also like to get a stereo microphone attachment for it. The mics that are built into it are actually surprisingly decent, but since a large part of what I'll be doing with it will be video it would be nice to take things to the next level. The most basic one I can

find is about $120, and I haven't yet decided if I want to (or should) spend any more money right now.

Today I have one more paper to write and a bit of studying for my Worldview final at 8:00AM tomorrow morning. Hopefully I will be leaving with my Dad soon after that to make the trip home. I haven't seen my family in almost four months, so it will be nice to get to spend a few weeks at home before embarking upon more untold craziness. But first I need to write that paper....
Posted by Andrew at 5/04/2011 04:32:00 PM