I've been keeping fairly busy preparing for Lebanon this past week. I've been going through a video course by Israel Hyman on using final cut, and while I had used the program for several projects before and understood the basics of it, I've learned a huge amount of functions that I had no idea how to access. I would highly recommend it if your reading this and it's something you're interested in learning.

I've also been practicing driving manual with my Dad's car, as automatics, like my car, are apparently non-existent in Lebanon, just like Europe. I don't really plan on driving while I'm there, but I figured in case of emergency I should probably at least be familiar with it.

I have just about everything that I need for the trip now, except possibly the most important thing: my passport. I've had my passport for a long time, but it had to be sent away to the Syrian consulate a get a visa that I may need over the summer. Unfortunately they've been having some political (and other) problems, which seem to have slowed the process down.

The gas drilling in our field, which was in full operation when I arrived back, just keeps going. They are now working on the 3rd well, which is apparently closer to our house than the rest, and it has been getting quite loud at night. It's fairly consistent, so I haven't had trouble sleeping from it, but I'm really glad it's not any closer than it is. The picture below shows what it looks like at night. So strange to see this in our field! 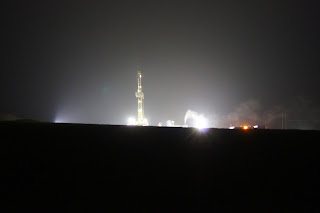