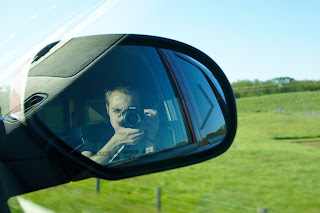 Had a good trip home from Tennessee the day before yesterday. My Dad had a stove delivery somewhere down south, so he showed up at Bryan around 8:30 Thursday morning, just as I was finishing my last final. We spent a couple hours stuck in traffic in Virginia, because a sinkhole opened in the middle of 81, but after a detour we almost completely made up the time, and the drive ended up being a lot prettier as we took 11, which is more of a historical route with lots of pastures and old houses and things. 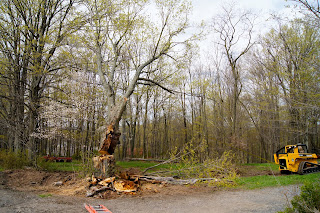 I wasn't at home for an entire day when my Dad already had me helping him cut down trees, which seems to be one of the main things that we spend time doing around here. I never really thought about it much when I had only ever lived here, but we cut down a lot of trees. There are certainly enough of them though. 80 years ago or so there were no trees in this part of Pennsylvania at all, as they had been logged. Then the depression hit and never really left our area, and the trees came back and filled in all the the farmland, and are still doing so. So while other parts of the world suffer from deforestation, we, for the last 60 years or so have had massive re-forestation. Despite their abundance, I was a little sad to see this one go. It was a really old one (one of the few that survived the logging 80 or 100 years ago) and had marked the corner of our lower driveway ever since it was built. It was half dead though, and probably would have fallen down soon, so I guess it was necessary.  We're now in the process of burning out the stump, which will probably take a few days. 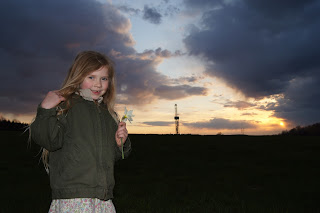 Last summer I arrived home to find that the "gas pad," the massive foundation which Talisman Energy was to use to drill for gas on our land had been completed. Drilling is in full swing now. I can actually hear it from across the field as I'm writing this (although it isn't actually as loud as I was afraid it would be.) Above is a picture of one of my sisters with the drilling rig in the background.

They probably won't start hydrofracking (the process used to get gas out of shale) until after I'm gone with ACTs, but it will be interesting to see if how it turns out. Hopefully they won't ruin our drinking water, and hopefully they will strike a substantial amount of natural gas. There are some definite environmental concerns from the process, but all things considered, I don't think it's really as bad as a lot of people make it out to be, and when you consider what the potential financial benefits could be, I feel like it's definitely worth it, especially with the financial situation my whole family has been in for the last five years or so.
Posted by Andrew at 5/07/2011 11:31:00 PM

It is sad to see those big trees go, at least there is a healthy maple waiting to replace it!

The depression WILL leave!!! But in the meantime we'll just go cut down more trees....