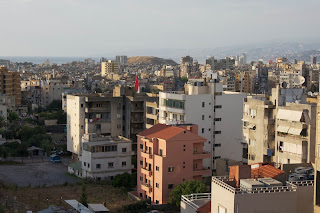 I've been extremely busy the last few days, and have ended up seeing more of the city than I planned to. It's a really diverse place. I had been expecting that I guess, but even so it was a surprise.

Yesterday I went went exploring in a rougher, perhaps more traditional neighborhood. It was basically what you would expect a Middle-Eastern city to look like, replete with beggars, run down buildings and cars that looked like the one below. I'm not sure if those are bullet holes, or some method of repairing a dent in the fender, but either way, I noticed several cars with similar punctures in their bodys.

I stopped at a little cafe/hooka bar on one of the streets and my friend Trooper struck up a conversation with the owner who turned out to be an Armenian (the ethnic group, not the theological persuasion.) The guy was, to put it plainly, rather scary looking, ripped, shaved head, heavy metal t-shirt, face studs, tattoos on his hands and neck, etc (I wanted badly to take a photo of him, but he wasn't really the kind of guy you just walk up to and take photo of....) "Welcome to hell," he said, with a big smile on his face when we told him we had both just arrived that week and had never been in the city before. Amidst the hookah's, beer bottles and posters of different hard rock bands in his shop, I also noticed a number of pictures of Jesus, the Virgin Mary, and several saints prominently displayed on the wall above the espresso machine. An interesting contrast... or maybe a paradox? 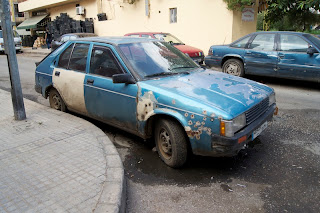 An even greater lesson in contrasting came just half an hour later when we hopped in a cab and took the three or four minute ride from that neighborhood to Centerville, the posh shopping district on the edge of the sea. Even though we were just a handful of blocks (and a security checkpoint or two) away from where we had come, we might as well have been in a different country. There were American and Italian outlet stores and snazzy looking cafes and clubs. There were no beggars, and the only cars in sight were Ferraris and SUVs with dark tinted windows. 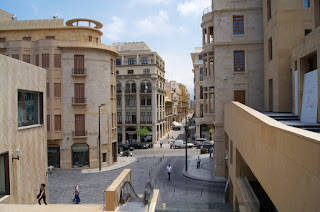 Today I spent more time in the Centerville area and went to the newly completed Hariri Mosque (dedicated to the Lebanese leader who got blown up in his car several years ago)  I also had a chance to see some of the towns farther up in the hills above the city, which are beautiful enough to hold their own against just about anything. I would upload some photos of those right now as well, but internet in Lebanon is pay as you go, and I don't really want to burn my host's bandwidth with a ton of uploads, so they will have to wait for now.
Posted by Andrew at 5/31/2011 09:14:00 AM

It is all so surreal! The fact that you are there, the way it goes from poverty to posh, the bullet holes and shwanky clothing outlets...sheesh.

Thanks for putting up the pictures you did. They are really cool.

Wow! what's the temperature there?

Amazing Pictures! Yes-one of that guy would have been great but maybe some other time :/

Good, it's actually almost like that here, though the next two days are going to be cooler.

The contrast is amazing! And about that guy...no picture needed-I'm already scared enough. :/

Oh, and Isaac, if you ever feel the need to know the temp. in Beirut-we have the location saved on weather.com.

hehehe - I love how you are all talking to each other on Andrew's blog! that's about how I feel with Jess's blog . . . but isn't it good to be able to keep in touch?

You're right Mrs. Rawleigh! I'm doing it right now in fact-and yes, it is good to keep in touch. :)

Andrew, I like the aspects you choose to cover. They really give us a feel for where you are. I think that's good journalism...